By Tetsushi Kajimoto TOKYO (Reuters) - Three in four Japanese companies expect U.S.-China trade frictions to last until at least late this year, a sharp contrast to market hopes that presidents Donald Trump and Xi Jinping might soon strike a deal to end their damaging trade war, a Reuters poll found. And nine in 10 think China's economic slowdown will persist at least through late this year, with more than half anticipating the world's second-largest economy will slow further in 2020 or beyond, the monthly Reuters Corporate Survey showed 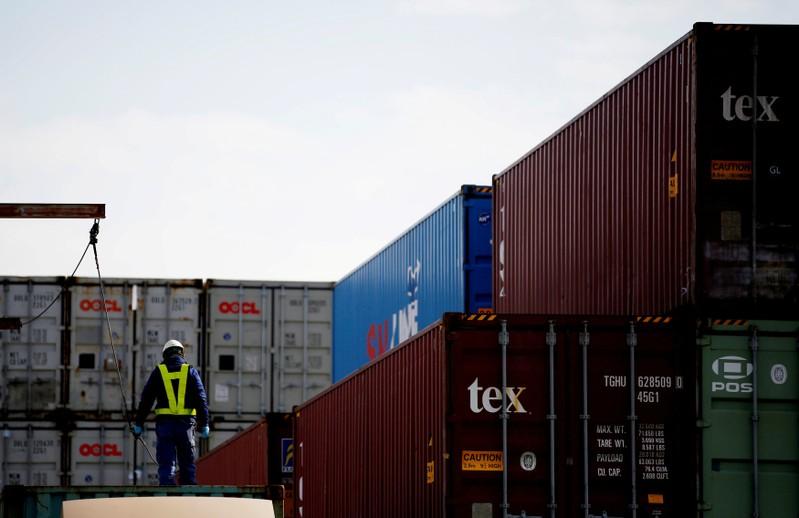 And nine in 10 think China's economic slowdown will persist at least through late this year, with more than half anticipating the world's second-largest economy will slow further in 2020 or beyond, the monthly Reuters Corporate Survey showed.

The trade war between the global titans - Japan's key export markets - has already curbed world trade, dealing a blow to the export-reliant Japanese economy. Japanese manufacturers depend heavily on customers in China to buy their products, especially the parts and equipment that reach China's factories and fuel its domestic and export growth.

Global financial markets have been buoyed by hopes that Trump and Xi could soon iron out a deal, ever since Trump delayed a threatened March 1 tariff hike. Treasury Secretary Steven Mnuchin said last week both sides were "working in good faith" to try to reach a deal "as quickly as possible."

Japanese firms, already suffering collateral damage from the row, are not optimistic about a quick resolution.

"In terms of negotiations on tariffs and trade imbalances, they may head to resolution by this year's end. But if it's substantial friction concerning hegemony, China and the United States will remain locked in dispute for coming 15-25 years," a manager of an electrical equipment maker replied in the survey.

The Reuters survey found 31 percent of companies expect the trade war to end in the second half of this year and 45 percent saying it will persist to 2020 or beyond.

The Corporate Survey found Japanese firms are increasingly feeling the pinch from the U.S.-China trade friction, although the overwhelming majority do not plan to move their operations out of China.

Compared with a similar survey in October, in which one-third of firms said they were affected by the trade war, the latest poll found 52 percent were being hit.

"Demand for electronics parts and cars is cooling, which we are afraid will curb growth," wrote a chemicals maker manager.

"Those who ship goods to China and manufacturers in the country are suspending or cancelling investment plans," wrote a machinery-maker manager.

The Reuters Corporate Survey, conducted monthly for Reuters by Nikkei Research, polled 479 large and midsize firms with managers responding on condition of anonymity. Around 230-243 answered the questions on trade and monetary policy.

Corporate fears of damage from the trade war and China's slowdown are feeding growing expectations that the Bank of Japan will maintain its massive stimulus for some time.

Those who want the central bank to unwind its easing fell to 27 percent from 45 percent in a January 2018 poll, while the share wanting it to hold steady rose to two-thirds from 49 percent.

"The outlook is unclear due to the global slowdown and the planned sales tax hike at home. Now is not the time to shift policy, although there's a need to consider future move by examining developments carefully," wrote a manager of a transport/utility firm.

It's been six years since BOJ Governor Haruhiko Kuroda unleashed an unprecedented burst of monetary stimulus in April 2013, with a pledge to meet 2 percent inflation in two years.

But inflation has been nowhere near the target, and the risks of keeping policy too low for too long are rising.

Kuroda insists that hitting 2 percent inflation is a priority and a vital way to stabilise prices although analysts and politicians are increasingly sceptical about the price goal.

The Corporate Survey found views were roughly split among Japanese firms on whether to maintain the 2 percent target, although companies unanimously agreed that it was ambitious.

Half the companies have a diminished view of Kuroda, suggesting that he is fighting a losing battle to achieve the inflation target as external pressure dents the effectiveness of Abenomics stimulus policies.

Asked whether trust in Kuroda has changed since he took office in March 2013, companies were roughly split in their views, with 48 percent saying trust in the governor has lowered, 51 percent unchanged and just 1 percent saying it has risen.

"I don't trust him," a manager of a transport equipment maker wrote.

"He has not just failed to achieve the 2 percent target but also make the time frame to meet the price goal ambiguous. That's bad."