By Ange Aboa SOUBRE, Ivory Coast (Reuters) - A pandemic-induced slowdown in global chocolate demand has led to a pile-up of about 100,000 tonnes of cocoa beans in Ivory Coast's interior, five exporters told Reuters, as farmers struggle to get by with lower-than-promised prices. 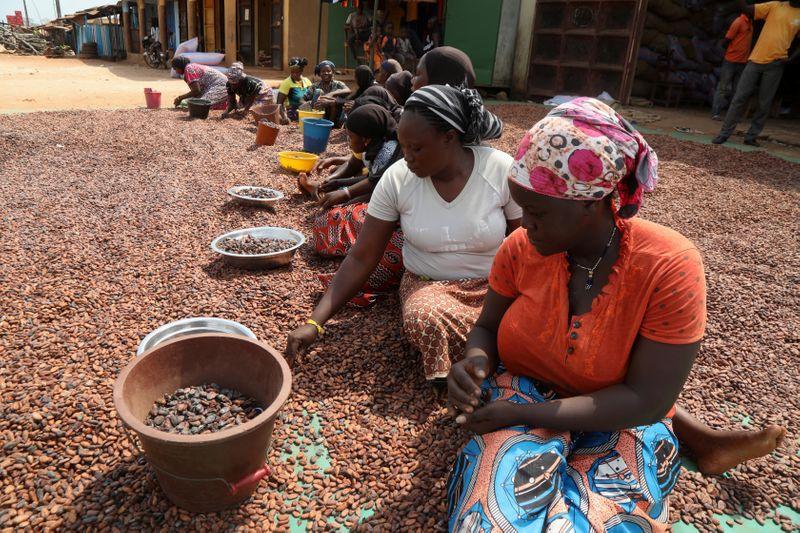 SOUBRE, Ivory Coast (Reuters) - A pandemic-induced slowdown in global chocolate demand has led to a pile-up of about 100,000 tonnes of cocoa beans in Ivory Coast's interior, five exporters told Reuters, as farmers struggle to get by with lower-than-promised prices.

The unwanted stockpile adds to a growing store of beans at ports in the world's top cocoa grower after chocolate makers and buyers in Europe and the United States asked that deliveries scheduled for October-December be postponed to January-March, the exporters said.

The estimated 100,000 tonnes of beans stuck at farms and cooperatives amounts to roughly one-third of Ivory Coast's monthly output at this time of year.

With fewer shipments leaving the West African nation, the regulator, the Coffee and Cocoa Council (CCC), has suspended a system registering cooperatives' beans to slow flows from the countryside, a source at the CCC told Reuters.

"It's a vicious cycle," said one director of an international export company based in Abidjan, speaking on condition of anonymity. "We don't have enough room to continue buying cocoa and storing it. If we resumed exports to Europe and the U.S. right now, there would be room here."

The delays are being felt keenly by farmers, who are struggling to sell their beans at the fixed minimum of 1,000 CFA francs ($1.82) per kg.

In the western region of Soubre at the heart of the cocoa belt, a cooperative in the village of Gnipi 2 was sitting on 250 tonnes of beans, its manager said. The manager of another cooperative there had 200 tonnes stockpiled, and more heaped in trucks on the side of the road, according to a Reuters witness.

With flows to the coast stalled, the cooperatives lack cash and space to buy more beans from farmers.

"We can't pay for our children's schooling."

The exporters did not say which of their international buyers had asked to postpone shipments. Chocolate makers such as Mars Inc, Hershey and Barry Callebaut purchase Ivorian cocoa.