Italy tells EU no change to budget, but will keep eye on debt, deficit

By Gavin Jones and Giselda Vagnoni ROME (Reuters) - Italy told the European Commission on Monday it would stick to its contested 2019 budget plans in defiance of EU fiscal rules, but promised not to inflate its deficit any further in the years ahead. In a letter to the Commission, Economy Minister Giovanni Tria said he recognised that the budget, which is set to hike next year's deficit to 2.4 percent of gross domestic product (GDP), was not in line with the EU Stability and Growth Pact. 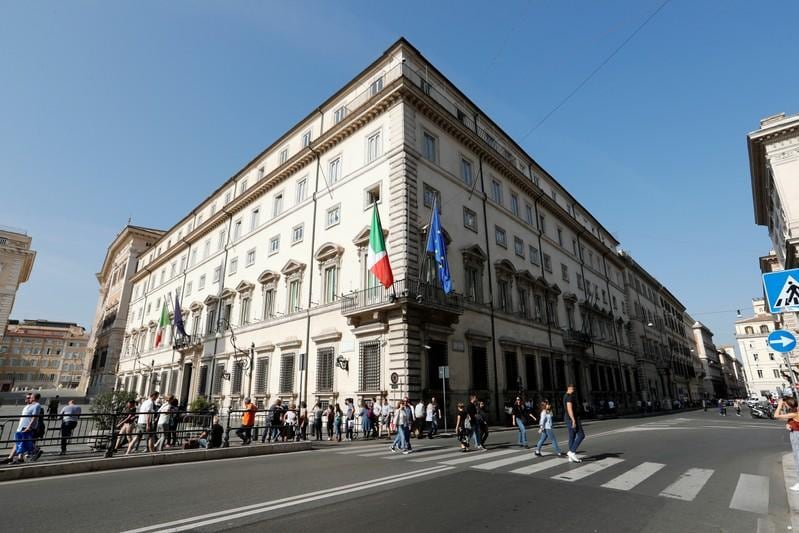 By Gavin Jones and Giselda Vagnoni

ROME (Reuters) - Italy told the European Commission on Monday it would stick to its contested 2019 budget plans in defiance of EU fiscal rules, but promised not to inflate its deficit any further in the years ahead.

In a letter to the Commission, Economy Minister Giovanni Tria said he recognised that the budget, which is set to hike next year's deficit to 2.4 percent of gross domestic product (GDP), was not in line with the EU Stability and Growth Pact.

However, looking to silence growing alarm from EU allies, he said the government had to respond to years of anaemic growth in the euro zone's third largest economy.

"(The budget) was a hard, but necessary decision in light of Italy's delay in catching up to pre-crisis levels of GDP and the desperate economic conditions in which the most disadvantaged citizens find themselves," Tria wrote.

The European Commission sent Rome a warning letter about the budget last week -- the first formal step of a procedure that could lead to Brussels rejecting the package and imposing fines.

An EU spokesman said the Commission would decide on Tuesday its next step.

Underscoring the growing tensions, German Finance Minister Olaf Scholz said Italy had to be "careful" over its debt, while Austrian Chancellor Sebastian Kurz called on the EU Commission to reject the budget unless changes were made.

Italian Prime Minister Giuseppe Conte dismissed Kurz's criticism as "incautious" and reiterated that Rome wanted to have "constructive dialogue" over the budget, which includes tax cuts, welfare hikes and a rolling back of tough pension reform.

In a wide-ranging news conference, Conte also stressed that his government, which comprises the right-wing League and anti-establishment 5-Star Movement, had no intention of abandoning either the euro currency or the European Union.

"Read my lips. There is no way Italy will leave the euro," Conte said. However, he added that the European Union was damaging itself by not meeting the needs of ordinary people.

Italy's economy is still some six percent smaller than it was at the start of 2008, hobbled by a slew of long-standing problems, including a national debt mountain at around 131 percent of GDP -- the second highest in Europe after Greece.

Conte predicted that growth would "take off" once government reforms were enacted. To help fund its expansionary programme, the Treasury sharply hiked the deficit goal from a targeted 1.8 percent this year.

"For us, 2.4 percent is the ceiling," Conte said. "As the budget comes into force, we are ready to contain it. We are not obliged to reach that figure and we certainly won't exceed it.

Concerns over the budget have weighed heavily on Italian government bonds in recent weeks, with the spread between German and Italian benchmark 10-year paper hitting 5-1/2 year highs on Friday.

However, Italian yields headed on Monday for their biggest daily drop since June after Moody's held off cutting the country's credit rating outlook to negative.

Moody's downgraded Italy's rating to Baa3 - the lowest investment grade category - on Friday as expected. But investors had fretted it would also set the outlook at "negative" because of the budget proposals.