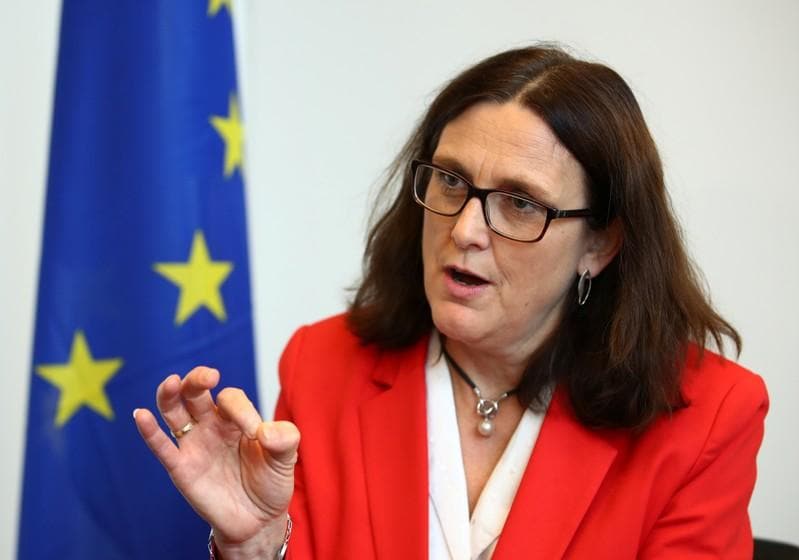 "If they are meeting, I think the whole world thinks that is a good idea," Malmstrom said in an interview on Friday. "The fact that there is at least a possibility that escalations will de-escalate rather and that these two countries are talking to each other would be a good sign for the whole world."

But the issues between the United States and China would not all be solved in Osaka, she added.

The United States and China have been locked in a trade dispute since last year marked by tit-for-tat tariffs on each other's imports as Washington tries to pressure Beijing to change its business policies. An escalation in tensions last month has raised concern about full-blown trade war that could trigger a global recession.

Although the European Union agrees with many of the U.S. criticisms of China over trade, it advocates going about things a different way, using the World Trade Organization to resolve disputes and negotiate new rules, Malmstrom said.

China needed to reform and "phase out their massive industrial subsidies" not only for ideological reasons but also for pragmatic reasons, to ensure European, U.S. and other Western foreign investment keeps flowing in, Malmstrom said.

She added there was a limit to the kind of change that Trump could achieve through such measures.

The EU has teamed up with Japan and the United States to try to agree new WTO global rules on subsidies, which would need to be agreed by the rest of the 164-member WTO, including China, to come into force.

"We are making very, very important advances. We are writing new legal texts, or proposed texts of things that do not exist yet," she said, without giving details of the proposals.

There have been six meetings at ministerial level and Malmstrom, who will step down in November, said she hoped for a further meeting after this summer to either reach a deal or come very close.

Trump has yet to decide if he might impose tariffs on imports of European cars. Malmstrom said her response is to "explain to this administration, to the Senate, to business, to everybody else" that 420,000 U.S. jobs depend on European car production there.

But the EU would not agree to restrict exports, which would be illegal under WTO rules, she said.