By Munsif Vengattil and Stephen Nellis (Reuters) - Intel Corp on Thursday beat Wall Street estimates for third-quarter revenue and profit and raised its full-year revenue forecast, powered by sales to data centers and easing concerns about slowing demand during the U.S.-China trade war. 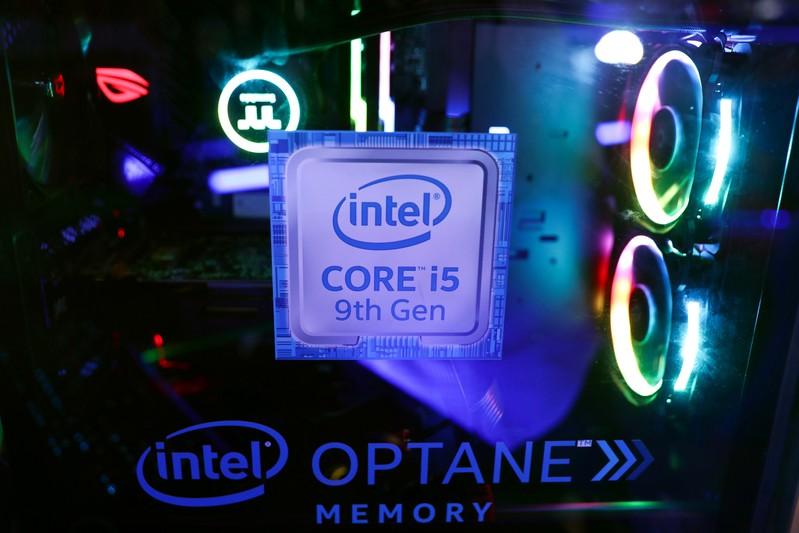 The results came as a relief to the industry after dour forecasts from two major chipmakers earlier this week.

After years of acquisitions outside its core area of processing chips under previous leaders, Intel under Chief Executive Bob Swan has reined in spending, slowing investments in areas like memory chips and shedding struggling businesses.

Intel, based in Santa Clara, California, has doubled down on its core markets such as personal computers and data centers, both of which beat analysts' third-quarter expectations.

Chief Financial Officer George Davis said Intel anticipated most of the year's data center spending would come in the second half because many customers bought chips in 2018 and took time to install them.

"Data center came back much more strongly than even we anticipated this quarter," Davis said in an interview. "Cloud customers actually grew year over year, and last year was an extraordinary year."

Intel has also been contending with a U.S.-China trade war that led to tariffs on its chips. About $200 million (£155.57 million) of Intel's third-quarter revenue came from Chinese data center owners purchasing chips sooner than they otherwise would have, likely out of trade concerns, Davis said.

However, PC makers did not appear to have shifted their buying to the third quarter to get orders in ahead of U.S. tariffs taking effect later this year, David noted. Intel saw about $200 million to $300 million of such activity last quarter, he said.

Intel, which is racing against rival Taiwan Semiconductor Manufacturing Co Ltd <2330.TW> to make smaller chips, said the move to the newer process was on track and it would have chips from its next generation by 2021.

Intel's board has approved a $20 billion increase in its stock repurchase program, the company said on Thursday.

Davis said revenue could have been higher but Intel was unable to make enough chips for entry-level PCs.

"Demand has just outstripped our ability to add capacity," Davis said. "In some ways it's a good problem to have, but anytime you can't satisfy your customers, that's not a good outcome."

Intel forecast fourth-quarter revenue of $19.2 billion, and adjusted earnings of $1.24 per share.

Analysts on average were expecting revenue of $18.82 billion and a profit of $1.21 per share, according to IBES data from Refinitiv.

For the full year, the company expects revenue of $71 billion, up from its earlier forecast of $69.5 billion. That came in above analysts' estimate of $69.43 billion.