In the long-running war of words with Infosys co-founder NR Narayana Murthy, Vishal Sikka has thrown in the towel and has resigned as CEO of Infosys. However, he continues to be executive vice-chairman. UB Pravin Rao has been appointed as interim MD. 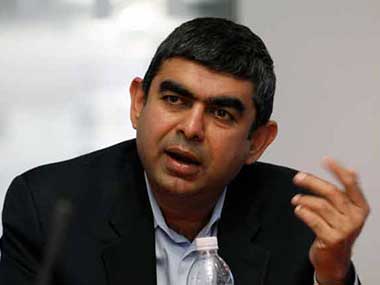 In a press release, Infosys said: "This is to inform you that the Board of Directors of Infosys Limited (the 'Company') has at its meeting today accepted the resignation of Dr Vishal Sikka as the Managing Director and Chief Executive Officer of the Company with immediate effect...appointed Mr UB Pravin Rao as the Interim-Managing Director and Chief Executive Officer."

In a short profile of Rao attached with the press release, Infosys said that Rao "has over 30 years of experience. Since joining Infosys in 1986, he has held a number of senior leadership roles including Head of Infrastructure Management Services, Delivery Head for Europe, and Head of Retail, Consumer Packaged Goods, Logistics and Life Sciences. Pravin holds a degree in electrical engineering from Bangalore University, India."

Earlier this month, Narayana Murthy had sparked a fresh row asking the management to make public a report of the audit it had commissioned on the acquisition of Israeli firm Panaya and other allegations about corporate governance at the country's second largest software exporter.

However, the company has rejected the demand, the report said. The internal audit was conducted by Gibson, Dunn & Crutcher, a global consultancy firm. Infosys has made public only the summary of the findings.

Murthy has written to the Infosys board asking why senior executives such as Ritika Suri quit the company soon after the report gave a clean chit. Suri, who led the acquisition of Israeli automation technology firm Panaya for Infosys, was based out of the US. She quit the company on by mid-July.

A former executive at SAP, Suri was brought into Infosys by CEO Vishal Sikka in September 2014. She was later elevated as the EVP (Corporate Development and Ventures).