By Aftab Ahmed and Manoj Kumar NEW DELHI (Reuters) - India is rolling back recent tax hikes on foreign and domestic equity investors and is accelerating a capital infusion of $10 billion into state-run banks, the finance minister said late on Friday, in an attempt to boost market sentiment and revive the slowing economy. The government also outlined a raft of measures including some for the crisis-hit autos sector, small businesses, and the troubled shadow banking sector to calm nerves of investors and lift consumer sentiment ahead of the Indian festive season that begins next month. 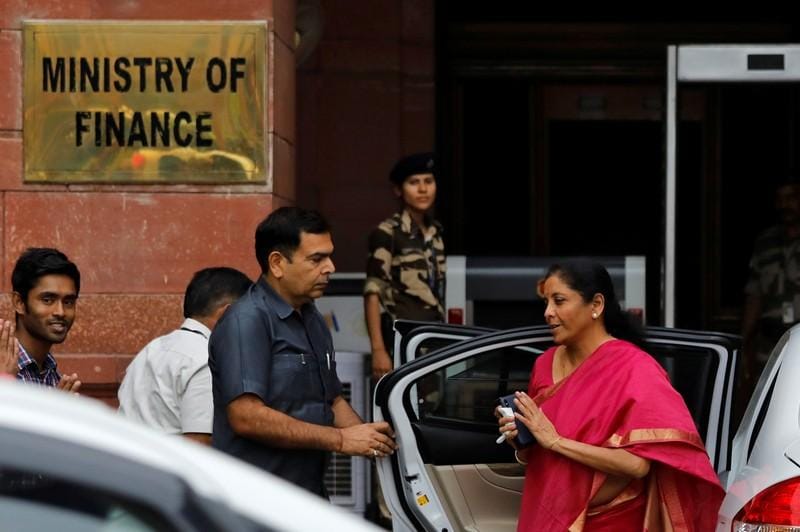 By Aftab Ahmed and Manoj Kumar

NEW DELHI (Reuters) - India is rolling back recent tax hikes on foreign and domestic equity investors and is accelerating a capital infusion of $10 billion into state-run banks, the finance minister said late on Friday, in an attempt to boost market sentiment and revive the slowing economy.

The government also outlined a raft of measures including some for the crisis-hit autos sector, small businesses, and the troubled shadow banking sector to calm nerves of investors and lift consumer sentiment ahead of the Indian festive season that begins next month.

"These measures are aimed at boosting growth, we are open to suggestions, we want to speed up growth," said Finance Minister Nirmala Sitharaman, at a news briefing outlining the measures.

The moves come after several business leaders and industries urged the government to take swift measures to boost demand and investments after economic growth slipped to near five-year lows in the January-March quarter. Most analysts expect data due this month to show that growth in April-June faltered even further.

Indian markets have sunk more than 10% since Sitharaman had outlined a higher surcharge on income of the super-rich including some foreign portfolio investors (FPIs), who have sold large positions since the surcharge was announced in the budget in early July.

On Friday, Sitharaman said she would exempt the investors, drop plans for a surcharge on long and short-term capital gains, and also provide additional 200 billion rupees ($2.8 billion) of liquidity to housing finance companies to help revive the real estate sector.

"Overall, the take home is that the government is listening, has listened, has identified solutions and have taken some quick and bold wide ranging decisions," said Ashishkumar Chauhan, head of Indian stock exchange operator BSE, in a statement.

"It should give confidence to everyone in business that this government is intent on solving all issues by discussions."

The new measures including the withdrawal of the hiked taxes on foreign investors would result in revenue losses of about 14 billion rupees ($195 million), having only a limited impact on government revenue, the finance ministry said.

Sitharaman said she was confident of meeting the fiscal deficit target of 3.3% of GDP considering the trend in revenue collections.

Investors said the measures outlined by Sitharaman are set to lift Indian markets on Monday and strengthen the rupee, which has been the worst performing Asian currency this month.

"This is a much needed boost for local and global sentiments toward India ... Equity markets could see a rally of 2%-3% come Monday," said a fund manager with a local mutual fund.

Any gains may be tempered by an escalation in the U.S.-China trade war, however. China late on Friday unveiled retaliatory tariffs against about $75 billion worth of U.S. goods, sending oil prices tumbling and Dow, S&P 500 and Nasdaq futures lower on Friday.

The move to infuse capital in housing finance companies that have been stung by a liquidity crunch following the collapse of Infrastructure Leasing & Financial Services (IL&FS) - a major player in the shadow banking sector - was also widely cheered.

"It is a very welcome move as banks have been reluctant to lend to HFCs and real estate companies which has led to stress in the sector. The amount is fairly large and it will definitely help the struggling industry," said Deepak Parekh, the chairman of HDFC, a major housing finance company. "Now it is to be seen how the National Housing Bank disburses the amount."

Sitharaman said the government was also working on ways to help the auto sector, including a plan to encourage scrapping of old vehicles to boost sales.

In a statement, Rohit Suri, the India head of Jaguar Land Rover, welcomed the decisions like the deferment of increased registration fees, but added that a reduction in the goods and services tax (GST) on vehicles that the industry has requested would have "been the real demand stimulant."

Passenger vehicle sales in July fell at the fastest pace in nearly two decades. The sales declines have triggered major job cuts in India's auto sector, with many companies forced to shut down factories for days and axe shifts.

Sitharaman said the capital infusion into state-run banks however, would enable nearly 5 trillion rupees worth of lending to consumers and businesses, spurring demand.

The government has also asked the banks to pass on benefits of rate cuts by the central bank, which has cut its benchmark repo rate by 110 basis points since February.

The Federation of Indian Chambers of Commerce and Industry, a broad cross-sector lobby group, also welcomed the decision to clear all pending GST refunds to small and medium enterprises within the next 30 days and ensure that all future GST refunds are cleared within 60 days, saying this "augurs well for industry."