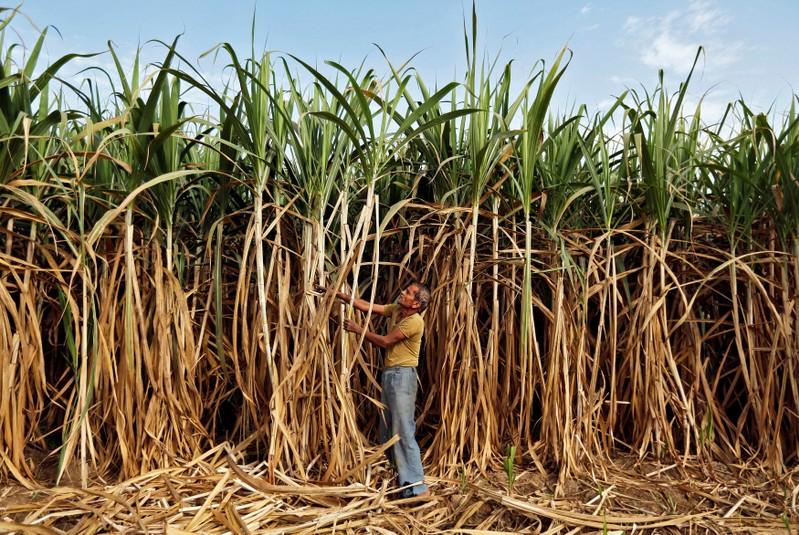 LONDON (Reuters) - India's sugar sector is in urgent of reform as stocks climb and high cane prices keep production costs far above those of its rivals, the Indian Sugar Mills Association said on Wednesday.

The association's director general, Abinash Verma, said India's sugar stocks were expected to rise during the 2018/19 season despite an expected dip in production to 31.5 million tonnes from the previous season's 32.5 million tonnes.

Indian sugar consumption should be 26 million tonnes and there is an export target of 5 million, indicating a build in stocks to 11.2 million tonnes from 10.7 million, Verma said at a conference organised by the International Sugar Organization.

"We would ideally like to carry about 4.5 million tonnes," he said.

"It would suggest that India should be in the international (export) market in the year 2019/20, even if there is talk of lower sugar production in India because of other issues."

India's government sets a minimum price that mills must pay for cane at a level that makes it much more attractive for farmers to grow than many other crops, Verma said.

"Among all the large sugar producers around the world, India is paying the highest sugar cane price to farmers," he said.

Verma said the Indian government needs to stop fixing the cane price and allow the country to move to a system such as revenue sharing between mills and farmers, otherwise there would continue to be surplus cane and surplus sugar.

"Sugar reform in India is not only a need now, it is an urgent need, it is almost a compulsion. We need to move ahead," he said.

Verma said reforms would, however, encounter political opposition because sugar cane farmers who benefit from the current system represent a key voting bloc in many parts of the country.

Some farmers angry about low prices for other crops, such as rice and wheat, told Reuters recently that they would vote for the opposition Congress party rather than the ruling Bharatiya Janata Party (BJP).