India leads the world, ahead of US, China, EU as global economic powerhouse

IMF has projected India's real GDP growth forecast to be the fastest among other G20 economies. Representational Image. Pexels.

New Delhi: Ahead of the keenly-watched G20 meeting, the International Monetary Fund, or IMF, in its latest report has said that the “recent high-frequency indicators confirm that the (global economic growth outlook in gloomier” than projected last month.

Interestingly, the IMF has projected India’s real GDP growth forecast to be the fastest among other G20 economies.

In its report, IMF said that in September this year, India, surpassed the United Kingdom, to become the fifth-largest economy in the world.

Morgan Stanley in its recent report has forecast that India will be world’s third-largest economy by 2027. But, where does India’s GDP stand as per the latest IMF report.

India’s GDP forecast vis-à-vis the US

According to IMF, 2022, World Economic Outlook, October, India’s economic growth in October 2023 is projected to at 6.1 per cent in, while that of the United States is expected to be 1.0 per cent. 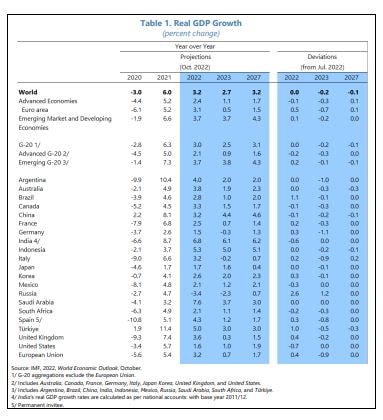 GDP forecast of China and the EU

Challenges before the global economy

In its report, IMF said, “Global economic growth prospects are confronting a unique mix of headwinds, including from Russia’s invasion of Ukraine, interest rate increases to contain inflation, and lingering pandemic effects such as China’s lockdowns and disruptions in supply chains.”

In its World Economic Outlook, released in October 2022, IMF lowered its global growth forecast for 2023 to 2.7 per cent. “We expect countries accounting for more than one third of global output to contract during part of this year or next,” the report said.

The IMF said that the challenges before the global economy are immense and weakening economic indicators point to further obstacles. “However, with careful policy action and joint multilateral efforts, the world can move toward stronger and more inclusive growth,” the IMF said.

What may weight on global economy growth?

The IMF has said that in most Group of 20 major economies the recent purchasing manager indices that gauge manufacturing and services activity signaled weakness, with economic activity set to contract while inflation remained stubbornly high.

“Readings for a growing share of G20 countries have fallen from expansionary territory earlier this year to levels that signal contraction. That is true for both advanced and emerging market economies, underscoring the slowdown’s global nature,” the IMF said.

It further said that the energy crisis in Europe would massively affect the growth and raise inflation, while prolonged high inflation could prompt larger-than-anticipated policy interest hikes and further tightening of global financial conditions.

That in turn posed “increasing risks of a sovereign debt crisis for vulnerable economies,” the IMF said.

India to be third largest economy by 2027

According to Morgan Stanley, India will become the world’s third largest economy by 2027 due to a shift in policy approach towards boosting investment, demographics advantages and the public digital infrastructure.

It has also forecast India’s GDP to grow from the current $3.4 trillion to $8.5 trillion over the next 10 years.

“Incrementally, India will add more than $400 billion to its GDP every year, a scale that is only surpassed by the US and China,” Morgan Stanley’s chief Asia economist Chetan Ahya wrote in Financial Times.

Ahya said that the shift in India’s policy approach is moving it closer to the East Asian model of leveraging exports, raising savings, and recycling it for investment. The economist cities the example of China and said that India’s GDP today is where China’s was in 2007 – a 15-year gap.

With inputs from www.imf.org