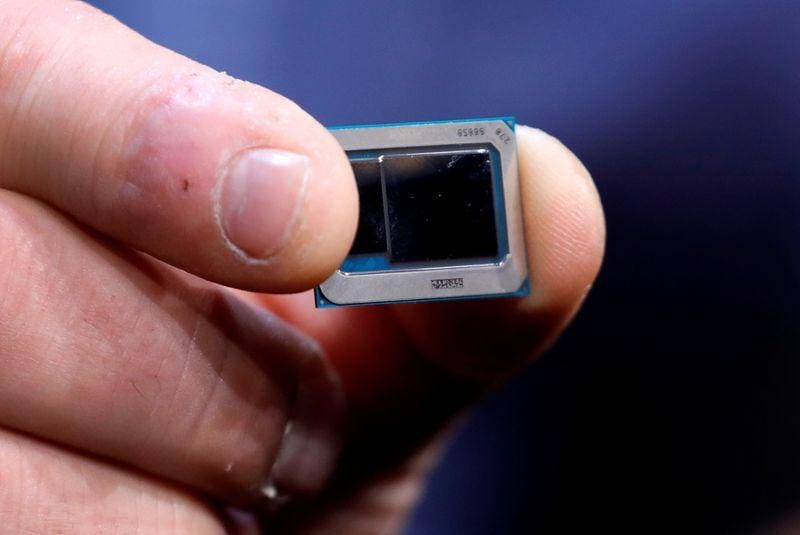 By Stephen Nellis and Ayanti Bera

(Reuters) - The incoming chief executive of Intel Corp said on Thursday that most of the company's 2023 products will be made in the company's factories.

On an earnings call on Thursday, Gelsinger said he had reviewed the company's manufacturing operations over the previous week and was "confident that the majority of our 2023 products will be manufactured internally" though he also said that Intel's use of outside chip factories is likely to increase.

For a half century, Intel has insisted that both designing and fabricating its own chips led to the best-performing products, a tenet of faith called into question after Intel lost its lead in manufacturing technology.

Intel on Thursday also forecast first-quarter revenue and profit above Wall Street expectations, continuing to benefit from high demand for laptops and PCs that have powered the shift to working and playing from home.

Shares rose 6.5% during regular trade, when the results were released ahead of the close. They later fell about 1.9% in after hours trading.

Intel said fourth-quarter sales from its PC chip business were $10.9 billion, compared with analyst estimates of $9.57 billion, according to FactSet data.

Data center group sales, which powered Intel's growth over the past several years, were $6.1 billion compared with analyst estimates of $5.48 billion, according to FactSet data. But sales to cloud computing customers, some of the largest and fastest-growing purchasers of data center chips, were down 15% in the fourth quarter. This is the second quarter in a row of decline and part of a what Intel's Chief Financial Officer George Davis called a pattern where customers buy large volumes of chips and then "digest" the purchases over several quarters. Data center chip operating margins were 34% in the quarter, down from 48% a year earlier.

"We think (data center) operating margins are going to improve as we get toward the second half of the year, when we expect to see a rebound in cloud" chip sales, Davis said, adding that it was too early to tell if the recovery would come in the first or second quarter of 2021.

Fourth-quarter revenues and adjusted earnings per share both topped Wall Street targets, according to IBES data from Refinitiv. The company also raised its dividend by 5%.

Intel, for decades the biggest maker of computing chips for data centers and PCs, is grappling with technology delays in its manufacturing operations and said in July it was debating whether to outsource more of its 2023 product lineup. Executives are expected to give details of the decision on a conference call at 5 p.m. ET today.

Intel is one of the few remaining semiconductor companies that both designs and manufactures its products, with rivals such as Advanced Micro Devices long ago having turned to outside contract factories such as Taiwan Semiconductor Manufacturing Co to make their chips.

Intel regained some momentum in the PC market, with volumes of PC chips rising 33%, a greater increase than the overall PC market shipment rise of 26% in the same quarter, according to data from IDC. It had released new "Tiger Lake" chips for high-end PCs for the holiday shopping season.

The chipmaker said it expects fiscal first-quarter adjusted sales of $17.5 billion and adjusted earnings per share of $1.10. Analysts average estimates were for $16.06 billion revenue and 93 cents earnings per share, according to IBES data from Refinitiv.

The company reported fourth-quarter revenue of $20 billion, beating estimates of $17.5 billion. Adjusted earnings per share in the fourth quarter of $1.52 topped the analyst consensus of $1.10.

(Reporting by Stephen Nellis in San Francisco, Ayanti Bera in Bengaluru and Peter Henderson in Oakland; Editing by Sriraj Kalluvila and Diane Craft)