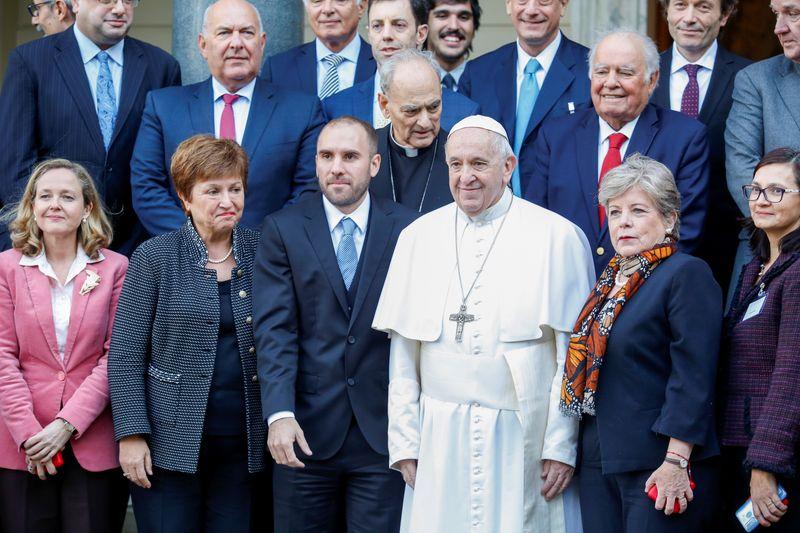 Guzman told the conference Argentina would under no circumstances continue servicing debt that was unsustainable and that pushed the country deeper into recession.

"We are going to be very firm on that," he said.

He balked at the 9% interest rate that Argentina is scheduled to pay to the Paris Club of country creditors in 2020 and 2021.

"That is not only unsustainable, it marks a very bad anchor for the rest of the restructuring," Guzman said.

He emphasized his opposition to fiscal austerity as a recipe for over-indebted countries and called for clear international rules to govern sovereign debt crises.

"Fiscal austerity in situations of unsustainable debt doesn't work. On the contrary, it's self-defeating," he said.

Georgieva and Guzman held what both said were 2-1/2 hours of constructive talks on Argentina's debt crisis on Tuesday night ahead of the conference.

"It is very important moment for Argentina to put in place policies that are going to stabilize the economy, lead to successful debt restructuring and respond to the expectations of people that those who are the most vulnerable not be left out," Georgieva told Reuters at the conference on economic solidarity.

Argentina needs to restructure $100 billion in sovereign debt with creditors, including the IMF, amid a steep recession with inflation above 50%.

The pope, who did not specifically mention the current Argentine crisis, called for "new forms of solidarity" to help indebted countries, saying "we are not doomed to universal inequality".

He stood by the government's deadline of having a bond revamp deal done by the end of March. An IMF technical mission is expected in Buenos Aires next week to discuss obligations owed to the fund.

The Vatican conference at the Pontifical Academy of Social Sciences brought together more than 25 government officials, religious authorities, and economists, including Joseph Stiglitz, the 2001 Nobel economics laureate.

Last Friday, Argentine President Alberto Fernandez met the pope and said the pontiff, who lived through a previous debt crisis when he was archbishop of Buenos Aires, had promised to do everything he could to help with the current one.

Fernandez has promised to bridge social divisions and roll out a massive credit system with low rates to bolster domestic demand, and to boost spending to address hunger and poverty.