New Delhi: Asserting that she is "politically very naive", Gita Gopinath, the Harvard economist and Economic Advisor to Kerala Chief Minister Pinarayi Vijayan, has said it would be good if she can be of help in thinking about the state's economic issues.

Gopinath, whose appointment as the Economic Advisor had sparked a political furore, said she was little surprised over the developments, adding, "I really hope it is behind me". 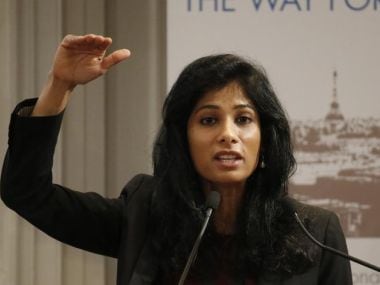 "I guess I am politically very naive. I think of myself as a technocrat. I am an economist. I don't attach any labels to myself and if I can be of any help to Kerala in terms of thinking about some of the economic issues there, provide my input which can be taken or discarded, I thought that would be a good thing to do," she told PTI in an interview.

Following her appointment, concerns were raised by some Communist leaders about the state government roping in a person who is more into market economy and liberal policies.

According to her, Kerala needs to fix its infrastructure deficit and improve ease of doing business, which would help attract more investments into the state. This has to be "perceptible, then investors will come", she explained.

Gopinath, the John Zwaanstra Professor of International Studies and of Economics at the Harvard University, said Kerala is a "very interesting state" because as it has very good welfare indicators in terms of healthcare and education.

"It is also the state with the highest state GDP per capita. So, there are many strings to the economy. At the same time, it is tied to some significant extent to developments in the Middle East because a lot of Malayalees go to the Middle East to work and send the remittances," she said.

"Remittances continue to be a significant part of Kerala's economy and with the slowdown in the Middle East, this is something that one has to grapple with."

"So, that will affect opportunities in the Middle East, workers would come back," she added. She expressed concern that despite Kerala being ranked No 1 in a lot of things, it has one of the highest unemployment rates in the country.

"What needs to be addressed is job creation, it needs to address healthcare issues. While there is a kind of accessibility to healthcare, there is still work to be done in treating non-communicable diseases on geriatric healthcare and given that they have a policy of universal healthcare, these are things they have to work on," Gopinath said further.