By Evan Duggan VANCOUVER (Reuters) - Chinese telecommunications giant Huawei Technologies Co Ltd Chief Financial Officer Meng Wanzhou arrived on Tuesday for a hearing before a Canadian court in a case that has strained Beijing's ties with Canada and the United States. Canada arrested Meng on Dec. 1 as she was changing planes in Vancouver, at the request of the United States, which on Monday brought sweeping charges against Huawei and Meng that paint the company as a national security threat 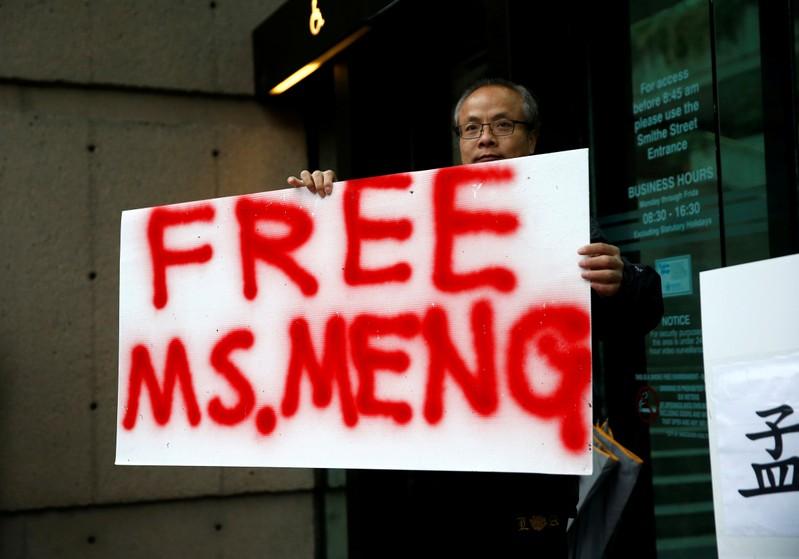 VANCOUVER (Reuters) - Chinese telecommunications giant Huawei Technologies Co Ltd Chief Financial Officer Meng Wanzhou arrived on Tuesday for a hearing before a Canadian court in a case that has strained Beijing's ties with Canada and the United States.

Canada arrested Meng on Dec. 1 as she was changing planes in Vancouver, at the request of the United States, which on Monday brought sweeping charges against Huawei and Meng that paint the company as a national security threat. Meng was charged with bank and wire fraud to violate U.S. sanctions against Iran.

Meng, the daughter of Huawei's founder, is scheduled to appear in court in Vancouver to discuss her bail terms, according to British Columbia Supreme Court schedules. She is fighting extradition to the United States. Following her arrest last month, China arrested two Canadians on national security grounds.

Her arrest further aggravates U.S.-Chinese tensions at a time when the world's two largest economies are locked in a trade war. U.S. President Donald Trump said in December that he could intervene in Meng's case if it would serve national security interests or help close a trade deal with China.

In her December bail hearing, Meng argued she should be released on bail, citing her longstanding ties to Canada, properties she owns in Vancouver and fears for her health while incarcerated.

In a sworn affidavit, Meng said she is innocent and will contest the allegations at trial in the United States if she is extradited. Meng said she was taken to a hospital for treatment for high blood pressure after being detained. She cited that condition in a bail application seeking her release pending an extradition hearing.

China's foreign ministry has urged the United States to drop the arrest warrant and end "unreasonable suppression" of Chinese companies. China has demanded her immediate release.

Huawei is the world's largest supplier of telecommunications network equipment and second-biggest maker of smartphones. It derives nearly half of its total revenue outside China.

Its global reach has come under attack from the United States, which is trying to prevent U.S. companies from buying Huawei equipment and is pressing allies to do the same. U.S. security experts are worried the gear could be used by China's government for espionage, a concern Huawei calls unfounded.

FBI Director Christopher Wray told lawmakers the lines between "the Chinese government and ostensibly private companies" are blurred if not totally erased and "especially the lines between lawful behavior and fair competition and lying and hacking and cheating and stealing."