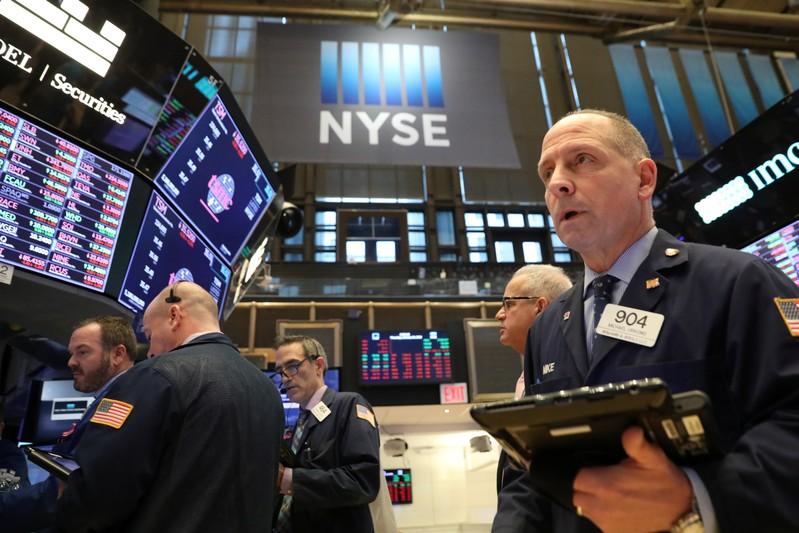 (Reuters) - U.S. stocks eked out gains on Thursday to consolidate near a one-month high, helped by advances in healthcare and industrial shares and as the financial sector shrugged off Morgan Stanley's disappointing earnings.

Shares of the investment bank

The S&P 500 financials index <.SPSY> fell as much as 1 percent, before recovering to trade just 0.11 percent lower. The index has not ended lower for 10 straight sessions.

"The news about Morgan Stanley is wearing off. The issues that caused the shortfall in revenue for Morgan Stanley seem to have been self-induced and not necessarily a commentary on what's going on in banking," said Kim Forrest, senior portfolio manager at Fort Pitt Capital Group in Pittsburgh.

The trade-sensitive sector was 0.48 percent weaker earlier in the day on fears that the fragile Sino-U.S. trade talks could be torpedoed after U.S. lawmakers introduced bills to ban the sale of U.S. chips or other parts to Huawei Technologies Co [HWT.UL] and certain other Chinese telecoms firms.

Also helping the market was a 0.60 percent bounce in health stocks <.SPXHC>. The index has been a laggard this year after having outperformed all major S&P sectors in 2018.

"Stocks have been supported this year by a lot of rebalancing that's going on. There is a ritual in the stock market of buying what was down the most or selling what was up the most the prior year," said John Augustine, chief investment officer for Huntington Private Bank in Cincinnati.

The S&P remains about 12 percent away from its Sept. 20 record close after a recent rally saw it claw back from a 20-month low around Christmas on concerns over a global economic slowdown.

The S&P index recorded one new 52-week high and no new lows, while the Nasdaq recorded 20 new highs and 13 new lows.