Growth and trade worries to keep a lid on European stocks in 2019: Reuters poll 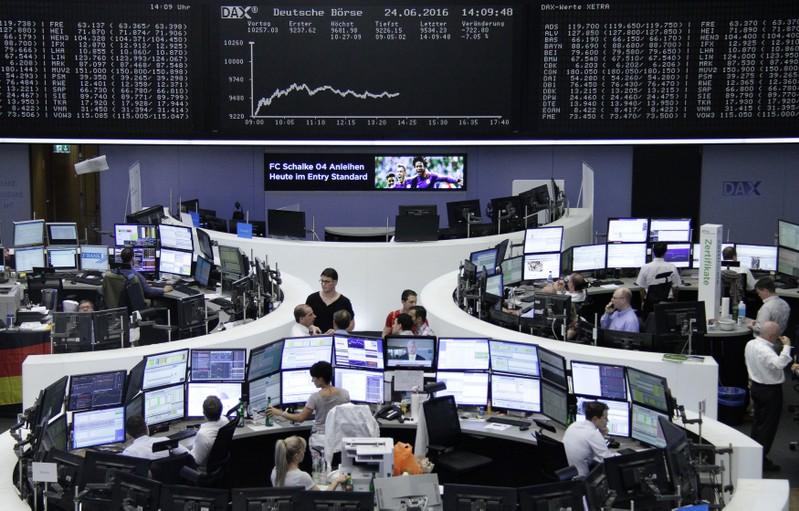 MILAN (Reuters) - European shares will move in a tight range going into the year-end and throughout 2019, a Reuters poll showed, as slowing growth, political risks and worries over Washington's protectionist policies keep investors on the sidelines.

European and euro zone indices have fallen 8-10 percent so far this year, lagging Wall Street, as analysts have been slashing their earnings growth forecasts amid a weakening economic outlook and tensions over Italy's budget.

The pan-European STOXX 600 <.STOXX> benchmark index is expected to reach 365 points by year-end, according to the poll of 27 brokers, fund managers and analysts, 1.9 percent above Monday's close of 358 points but 6.2 percent down on the year.

"Compared to U.S. stocks nobody really wants too much of a risk exposure to euro zone equities as Brexit uncertainty and a possible trade war with the U.S. are continuing to spook investors," said Markus Huber, a trader at City of London Markets.

"Short-term bounces are always possible and likely but a complete turnaround won't be possible until there is less uncertainty prevailing in the markets," he added.

The poll was taken between Nov. 19-26 when world stocks tested lows hit at the end of October following a brutal sell-off that wiped off trillions of dollars of market caps.

The latest forecasts are weaker than in the previous August poll, which forecast the STOXX 600 climbing to 400 points by end-2018 and Euro STOXX 50 hitting 3,575 points.

At the time European corporate earnings were expected to rise more than 6 percent in 2018 but growth expectations have since been scaled back to a rate of below 5 percent.

"We do not see euro zone equities performing next year as (we) expect the earnings cycle to continue to deteriorate," said Stephane Ekolo, strategist at Tradition in London.

On top of that, the normalisation of monetary policy by the European Central Bank, which is seen ending its massive 2.6 trillion-euro monetary stimulus scheme at the end of this year, is unlikely to provide any support.

"Investors are already pricing the end of the ECB easing policy, mostly anticipated for the end of 2019, which will give a boost to the euro currency, putting even more pressure on stocks," said Guy Foster, head of research at Brewin Dolphin.

Relatively cheap valuations for some euro zone companies however could provide support, even though European benchmarks are expected to remain next year well below the highs hit earlier in 2018.

"(The outlook) is mixed because valuation multiples are cheap but there is little momentum," said Marco Vailati, head of research at Italy's Cassa Lombarda.

Investors also said much of Europe's performance will depend on Wall Street. "This means if the U.S. recovers, euro zone stocks will recover too but to a lesser degree," said City of London's Huber.

(To read other stories from the Reuters global stock markets poll)