By Erwin Seba HOUSTON (Reuters) - Texas authorities on Friday charged climate change protesters who shut down the largest U.S. energy-export port for a day by dangling on ropes from a bridge in Houston. The Harris County Sheriff's Office charged 31 people, including Greenpeace protesters and others who supported them, under a state law that makes it a felony to disrupt energy pipelines and ports. 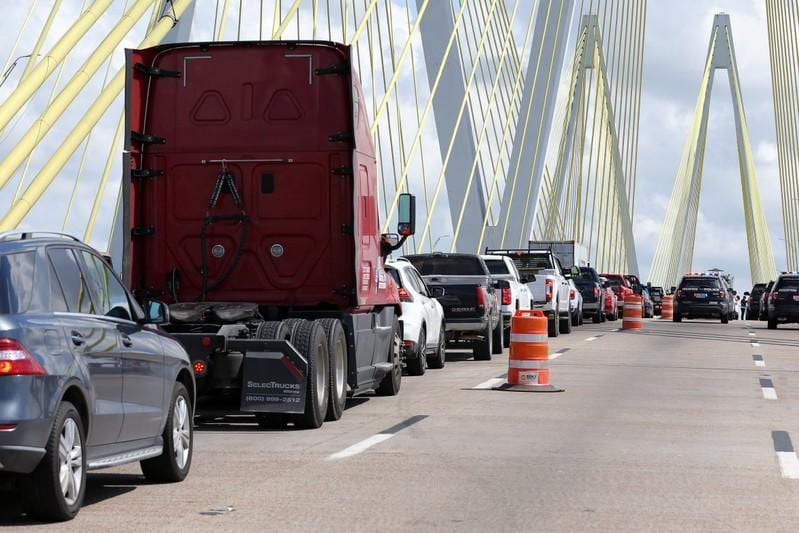 HOUSTON (Reuters) - Texas authorities on Friday charged climate change protesters who shut down the largest U.S. energy-export port for a day by dangling on ropes from a bridge in Houston.

The Harris County Sheriff's Office charged 31 people, including Greenpeace protesters and others who supported them, under a state law that makes it a felony to disrupt energy pipelines and ports. The group shut a portion of the Houston Ship Channel all of Thursday.

Those charged include six people not in custody, a spokesman for the sheriff's office said. All face up to two years in prison if convicted under the Texas "critical infrastructure" law that took effect last month.

All 31 also face charges for trespassing and obstructing a roadway, the spokesman said.

"This is a bullying tactic that serves the interests of corporations at the expense of people exercising their right to free speech," said Tom Wetterer, Greenpeace's general counsel.

Texas this year was one of seven states nationwide that passed laws seeking to curb protests that broke out across the nation over energy projects such as the Dakota Access Pipeline and Bayou Bridge pipeline.

"Critical infrastructure laws like Texas' were created by oil and gas lobbyists and secretive groups like the American Legislative Exchange Council to restrict First Amendment rights and to try to bring to bear extraordinary consequences for legitimate protests," said Wetterer.

Greenpeace could face a $500,000 fine under the Texas law for supporting the protests, said Jennifer Hensley, director of state lobbying and advocacy for environmental group Sierra Club, which is fighting some of the laws.

The Houston Ship Channel on Friday reopened for vessel traffic, the U.S. Coast Guard said, after the last of 11 protesters who had disrupted traffic by hanging from ropes above the key energy-export waterway was removed by police earlier in the morning.

A large portion of the channel was closed when protesters attached themselves and banners to the bridge over the waterway to bring attention to climate change during Thursday's debate of Democratic presidential hopefuls in Houston.

Police early on Friday arrested 23 Greenpeace members involved in the protest, with the last removed at about 1 a.m. by Harris County Sheriff's officers, said Travis Nichols, a Greenpeace spokesman. The 23 were taken to the Harris County jail in Houston.

The protests had halted movement on a large portion of the Houston Ship Channel, which stretches 53 miles (85 km) from its entrance in the Gulf of Mexico to the Port of Houston. The area affected is home to five major oil refineries as well as chemical and oil-export terminals.

Day-long shutdowns caused by fog are typically cleared within a day, a Coast Guard official said on Thursday.