By Eric Onstad LONDON (Reuters) - Gold ticked higher on Tuesday as the dollar slipped, but struggled to stabilise after weeks of losses. Spot gold was 0.3 percent firmer at $1,227.70 an ounce at 1345 GMT while U.S. 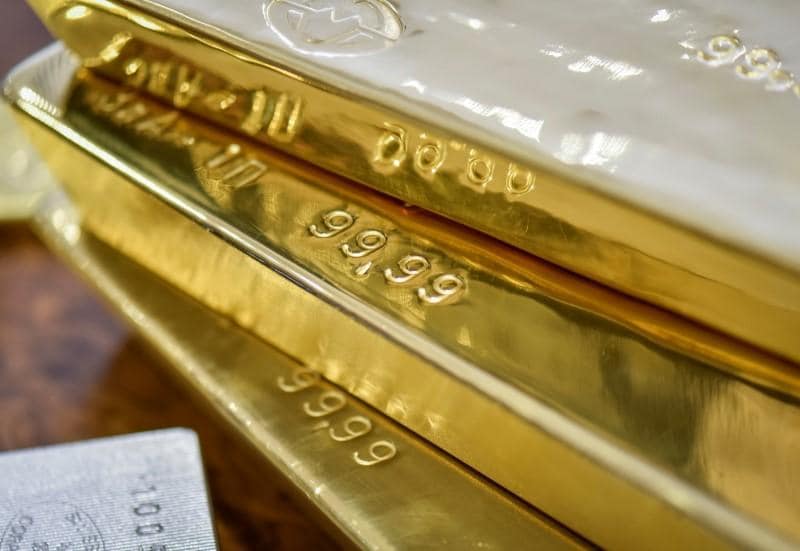 LONDON (Reuters) - Gold ticked higher on Tuesday as the dollar slipped, but struggled to stabilise after weeks of losses.

The dollar index, which measures the greenback against a basket of six major currencies, fell 0.2 percent after touching a one-year high last week.

Gold has shed more than 10 percent since touching a peak of $1,365.23 in mid-April, largely hit by a stronger dollar amid U.S. interest rate hikes. Last week it hit a one-year low.

"Gold is likely to see a sideways trend in coming weeks, trying to find a bottom," said Carsten Fritsch, commodity analyst at Commerzbank in Frankfurt.

"It's too early to say that gold has bottomed out, but there are some tentative signs pointing in that direction. This process could take weeks if not months to recover from the losses and the damaged technical picture," he said.

On the technical side, gold has broken below the 200-day moving average on a weekly basis.

He said one positive sign was that holdings of SPDR Gold Trust, the world's largest gold-backed exchange-traded fund, rose 0.6 percent to 802.55 tonnes on Monday, its highest in over two weeks.

Gold could see volatility with sharp, brief moves higher on short-covering since speculative short positions were at the highest levels since late December, Fritsch added.

Gold prices, which usually gain in times of political and financial instability, have failed to do so, analysts noted, with investors' reaction to the dispute between the United States and Iran staying muted.

Iran dismissed on Monday an angry warning from U.S. President Donald Trump that Tehran risked dire consequences if it made threats against the United States. Trump was responding to comments by Iranian President Hassan Rouhani.

"In addition to the U.S. dollar, there has been little follow through on the Trump and Rouhani war of words and frankly the overall reaction on risk sentiment was muted," said Stephen Innes, APAC trading head at OANDA.

The other precious metals, which have industrial applications, got a boost from higher base metal prices.

"We continue to be positive on palladium from a fundamental perspective, and view recent weakness as an opportunity to build longer-term positions."