By Arijit Bose (Reuters) - Gold jumped over 1 percent to a more than seven-month high on Friday, briefly surpassing the $1,300 mark, as the dollar slid ahead of a U.S. Federal Reserve meeting next week where the central bank is widely expected to leave interest rates unchanged. 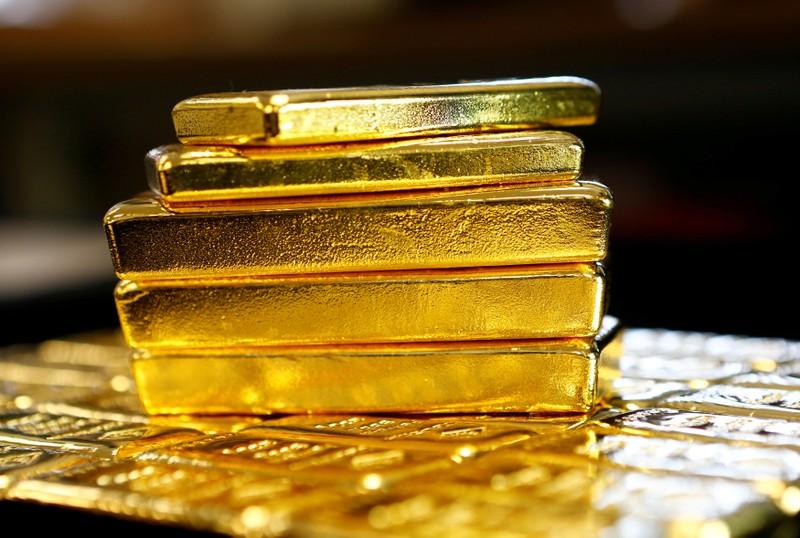 (Reuters) - Gold jumped over 1 percent to a more than seven-month high on Friday, briefly surpassing the $1,300 mark, as the dollar slid ahead of a U.S. Federal Reserve meeting next week where the central bank is widely expected to leave interest rates unchanged.

"The major catalyst supporting gold is a big drop in the dollar, amid expectations the Fed will reiterate a pause to its hiking cycle next week," said Fawad Razaqzada, an analyst with Forex.com.

The dollar fell off a three-week high it scaled in the previous session, as investors turned their attention to the Fed meeting next week. This made gold, which is traded in dollars, cheaper for holders of other currencies. [USD/]

"There are also some rumours that the Fed is backing off their quantitative tightening program, which would mean they are going dovish. This would in turn mean a probable end of rate hikes in 2019, which would be supportive for gold," said Bob Haberkorn, senior market strategist at RJO Futures.

Investor sentiment toward gold has been considerably ripe with holdings of SPDR Gold, the largest gold-based Exchange Traded Fund, hovering around their highest levels since late June 2018. [GOL/ETF]

A synchronised global economic slowdown is underway and any escalation in the U.S.-China trade war would trigger a sharper downturn, according to the latest Reuters polls of hundreds of economists from around the world.

Investors are also worried about the impact of the longest U.S. government shutdown in history, with two bills to end the partial shutdown failing to win enough votes in the Senate.

Yet another key focus is U.S.-China trade relations. U.S. Commerce Secretary Wilbur Ross said on Thursday the two countries were "miles and miles" from resolving issues.

Among other metals, palladium, which hit a record high of $1,434.50 an ounce last week on low inventories and rising demand, gained 2.9 percent to $1,358 but remained on course for its first weekly drop in five after falling over 1 percent so far this week.

(Reporting by Arijit Bose in Bengaluru; Editing by Richard Chang)