By Karthika Suresh Namboothiri and Diptendu Lahiri (Reuters) - Gold prices retreated from a six-year high on Tuesday after comments from U.S. Federal Reserve officials trimmed expectations that the central bank will lower interest rates by half a percentage point next month. Federal Reserve Chairman Jerome Powell said the U.S 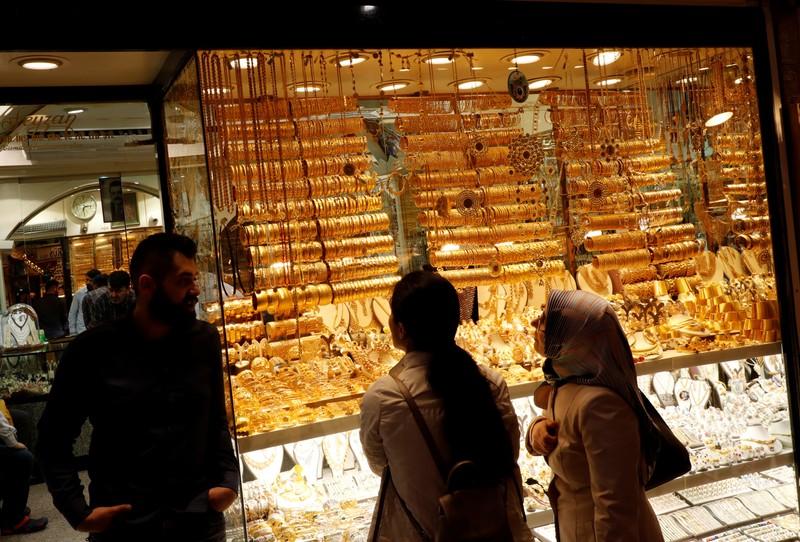 (Reuters) - Gold prices retreated from a six-year high on Tuesday after comments from U.S. Federal Reserve officials trimmed expectations that the central bank will lower interest rates by half a percentage point next month.

The comments came after St. Louis Federal Reserve Bank President James Bullard said he does not think the U.S. central bank needs to cut interest rates by a half-percentage point at its next meeting in July.

"The whole gold move (higher) was on the back of the Fed's signal to cut rates by 50 basis points in the last FOMC (Federal Open Market Committee) meeting," said Bob Haberkorn, senior market strategist at RJO Futures.

"Now, Bullard and Powell's comments are going against that and Trump's wishes. It is probable that gold might continue paring gains to until the G20 meeting."

The comments lifted the dollar and pressured gold, prompting bullion to turn negative briefly, after it had rallied more than 1% earlier in the session on the back of expectations of monetary easing by the Fed and a subdued dollar.

Lower interest rates reduce the opportunity cost of holding non-yielding bullion, and gold had gained nearly $100 in value since the Fed's statement last week that hinted at monetary easing.

Meanwhile, tensions between Iran and the United States lifted demand for safe-haven gold. Investors also watched for further cues on trade negotiations between Washington and China at the G20 summit.

"People have been buying what they feel could be an additional haven on more upcoming volatility caused by global economic pullback, the tinder box of the Middle East with Iran, and the G20, which may not bring the (trade) deal with China that everybody is expecting," said George Gero, managing director at RBC Wealth Management.

(Reporting by Karthika Suresh Namboothiri and Diptendu Lahiri in Bengaluru; Editing by Will Dunham and Matthew Lewis)