By Karthika Suresh Namboothiri BENGALURU (Reuters) - Gold prices slipped on Friday as investors banked on the safety of the dollar over worries about a slowdown in the global economy, exacerbated by a sharp decline in oil prices. Spot gold fell 0.32 percent to $1,222.74 per ounce at 12:10 pm EST (1710 GMT), while U.S 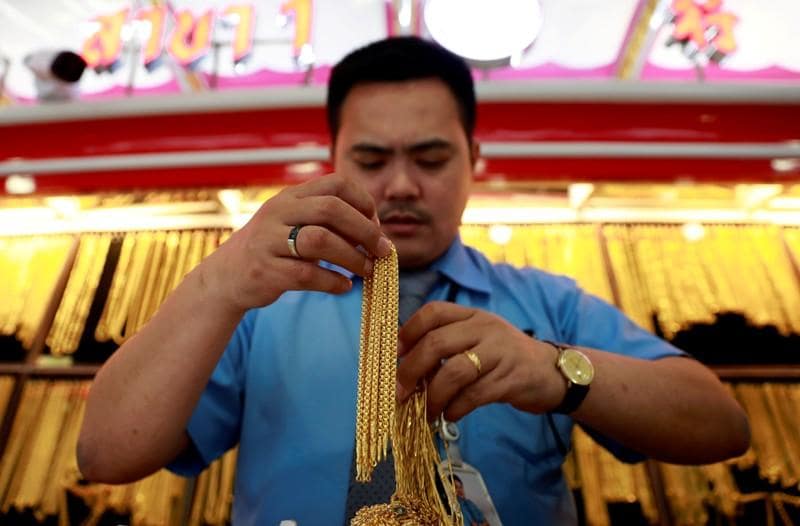 BENGALURU (Reuters) - Gold prices slipped on Friday as investors banked on the safety of the dollar over worries about a slowdown in the global economy, exacerbated by a sharp decline in oil prices.

"The dollar index is up and we are waiting for the U.S. Federal Reserve next week, with (chairman) Jerome Powell speaking. We expect he will be on course to continue with the interest rate hike in December," said George Gero, managing director at RBC Wealth Management.

Prospects of higher U.S. interest rates are negative for dollar-priced gold as they raise the opportunity cost of holding bullion.

"Crude prices are down and that pulls down the buying power of commodity accounts, so people are not buying gold," Gero added.

The dollar was on track to notch its biggest weekly percentage increase in a month, as markets were rattled by a steep drop in oil prices that suggested global growth is slowing.

The greenback also benefited from a retreat in the euro, which slumped half a percent following a Purchasing Managers Index (PMI) survey that showed business growth in the euro zone had slowed much faster than expected this month.

Gold, a traditional safe store of value during times of political and economic uncertainty, has lost out to the dollar this year, with the metal having fallen more than 10 percent from a peak in April against the backdrop of a U.S.-China trade tussle.

"As far as gold is concerned, the dollar has become the more important driver for prices this year and that trend remains in place," UBS strategist Joni Teves said.

Gold market participants have now turned eyes towards a G20 summit in Argentina at the end of the month, where leaders from the United States and China are expected to hold talks.

"Investors' reluctance to react to trade tensions casts uncertainty on gold, raising the question of when demand will return," Julius Baer analyst Carsten Menke wrote in a note.

Palladium was headed for its biggest weekly percentage decline since the week of July 20, down about 3 percent so far and drifting off a record high of $1,185.40 hit on Nov. 16.

"The elevated gold/silver ratio suggests that the long-held belief of silver outperforming gold in times of economic strength is no longer warranted as both depend on investment demand," Julius Baer's Menke said in the note.