By Arijit Bose (Reuters) - Gold rose on Friday en route to a second weekly gain as the dollar was subdued by weak U.S. economic data and hopes of a breakthrough in the U.S.-China trade dispute, with a darkening global economic outlook bolstering interest in bullion. Spot gold was up 0.5 percent at $1,329.42 per ounce by 1603 GMT, or higher by about 0.6 percent thus far this week 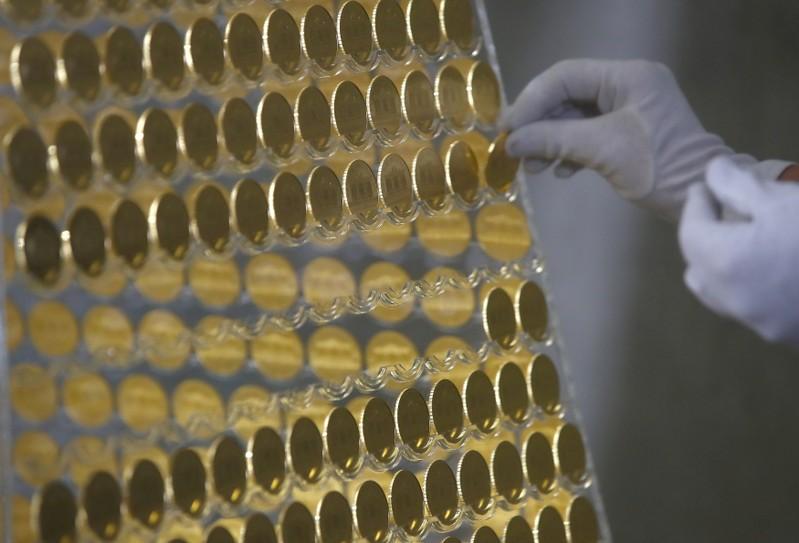 (Reuters) - Gold rose on Friday en route to a second weekly gain as the dollar was subdued by weak U.S. economic data and hopes of a breakthrough in the U.S.-China trade dispute, with a darkening global economic outlook bolstering interest in bullion.

The metal had fallen about 1 percent on Thursday following the release of minutes from the U.S. Federal Reserve's last policy meeting, which painted a less dovish picture than expected.

"Gold should be doing a little better, because there are possibilities of a trade deal, which would mean the dollar could weaken; the U.S. economy is also slowing quite markedly, that should keep interest rates fairly dormant," INTL FCStone analyst Edward Meir said.

The dollar index, though little changed versus six other major currencies on Friday, was set for its biggest weekly fall in a month, bolstering the appeal of gold.

The U.S. currency, which has been a refuge for investors during the U.S.-China trade dispute, has come under pressure on signs of a breakthrough in talks. [USD/]

Also helping the case for gold, new orders for U.S.-made capital goods unexpectedly fell in December, reviving some market expectations that the Fed would halt its 2019 rate-increase cycle.

The news added to concerns about a slowdown in Europe and China, which analysts said have prompted increasing interest in gold, considered a safe haven in times of economic and political uncertainty.

Natixis analyst Bernard Dahdah said the slight pullback did not signal a shift by gold investors since the levels were still close to highs recorded at the start of 2019.

The autocatalyst metal was on track for a third straight week of gains, up about 4.2 percent.