Gold eases as dollar gains ahead of Fed meeting minutes 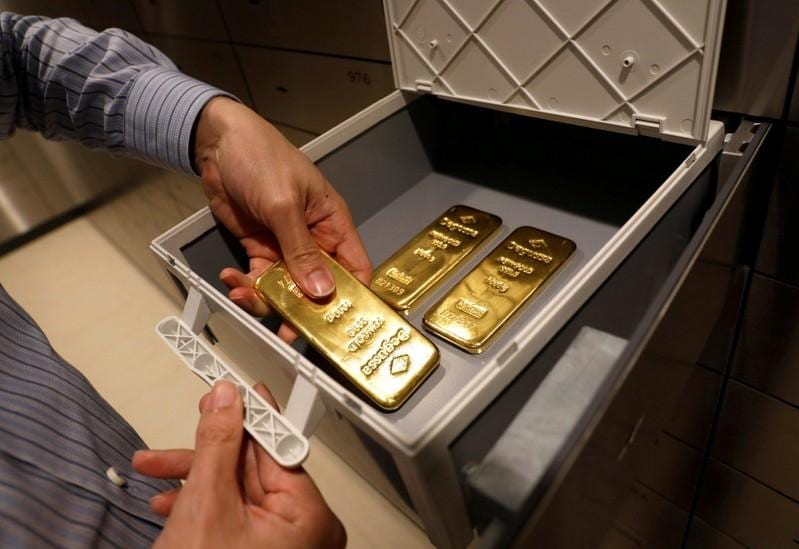 NEW YORK/LONDON (Reuters) - Gold fell on Wednesday as the U.S. dollar rose against a basket of currencies while investors awaited minutes from the U.S. Federal Reserve's latest policy meeting for clues on the pace of interest rate hikes.

The dollar, in which gold and other commodities are priced, rose versus a basket of currencies before the 2 p.m. EDT (1800 GMT) release of the Fed meeting's minutes.

"We're down on the stronger dollar," said Bob Haberkorn, senior market strategist at RJO Futures. "The market's waiting to see what the language is ... but expecting a confirmation of the rate hike in June."

At its previous meeting in May, the U.S. central bank expressed confidence in the economy and global growth, and kept its benchmark lending rate unchanged. It said inflation was near the bank's target, leaving it on track to raise borrowing costs in June.

Gold is highly sensitive to rising U.S. rates, as these tend to boost the dollar and make bullion, a non-interest-bearing asset, less attractive to investors.

"Any strong data that confirms a trend of global growth at the very least maintaining and we will continue to see gold prices suffer," said Tyler Ritchey, analyst at the Sevens Report.

Often used to store wealth in times of political or economic uncertainty, gold was underpinned by safe-haven support after U.S. President Donald Trump said he was not pleased about recent talks with China.

Trump also cited a "substantial chance" his summit with North Korean leader Kim Jong Un will not take place as planned on June 12 amid concerns that Kim is resistant to giving up his nuclear weapons.

Prices remained in a narrow range, just below $1,300 per ounce, as investors awaited more clues on the path of U.S. interest rates.

Gold has shown reduced volatility in the last few trading sessions as it attempted a break above $1,300 and prices are "waiting for a new, clear direction," said ActivTrades chief analyst Carlo Alberto De Casa.