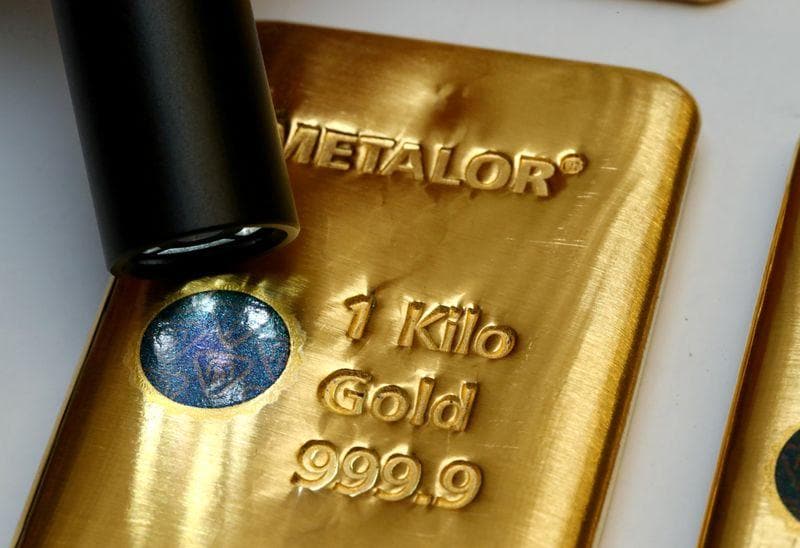 (Reuters) - Gold dropped more than 2% on Thursday to break below the key psychological $1,800 level as a rising dollar and U.S. Treasury yields eroded bullion's appeal.

Silver prices have declined more than 13% since a GameStop-style retail frenzy sent them to their highest in nearly eight years at $30.03 on Monday.

The steepening of the yield curve "ultimately means the cost of holding gold across the curve is increasing. Gold could go even lower and consolidate in response to ... the whole idea that the U.S. and global economy are recovering," said Bart Melek, head of commodity strategies at TD Securities.

However, silver could benefit from industrial demand, Melek added.

Allaying some concerns over the health of the economy was a drop in Americans filing new applications for unemployment benefits last week.

Making bullion more expensive for holders of other currencies, the dollar scaled a more than two-month peak while longer-term U.S. Treasury yields rose on anticipation of a large pandemic relief package from Washington and a stabilizing U.S. labor market.

While gold usually gains from more stimulus, since it is considered a hedge against inflation from widespread stimulus measures, higher yields challenge that status because they increase the opportunity cost of holding non-yielding bullion.

"Growing expectations about a relatively quick end to the pandemic are raising economic recovery hopes and with it the likelihood of central banks reducing the current hyper-dovish monetary stimulus," ActivTrades chief analyst Carlo Alberto De Casa said in a note.

(Reporting by Eileen Soreng in Bengaluru; Editing by Kirsten Donovan and Richard Chang)