Indian corporate giant GMR's $500 million Male airport project has run into rough weather, as Maldives government has temporary halted work on a new terminal building and the company has moved an arbitration court in Singapore over development charges.

GMR had won the airport contract when government headed by former President Mohamed Nasheed was in place, but the project, the largest single investment in the history of Maldives, began facing problems soon after a regime change in the country earlier this year. 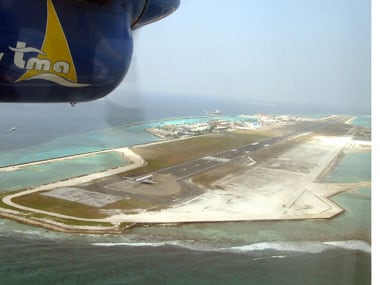 The new government, headed by President Mohamed Waheed, has asked GMR to temporarily halt the development of a new terminal at Ibrahim Nasir International Airport (INIA). Construction for the new terminal was part of the airport modernisation package. It started in December last year and is scheduled to open in 2014.

The dispute aggravated further after GMR moved an arbitration court in Singapore over Airport Development Charge (ADC) of $25 per passenger. When contacted, a GMR spokesperson told PTI that GMIAL (GMR Male International Airport Pvt Ltd) has obtained requisite approvals in compliance with the prevailing regulations at the time of commencement of construction.

"We have received a letter from Maldives Civil Aviation Authority asking us to seek its approval pursuant to a recent regulation, for the construction works related to the proposed new Passenger terminal building," the spokesperson said.

"Pending the approval, MCAA has directed stoppage of the said works. This has no impact on the operations of the airport at the existing terminal," GMR said but did not offer any comments on the arbitration issue.

GMR had signed a 25 year concession agreement with Maldives to upgrade and manage the airport, under which an ADC of USD 25 was to be levied on all outgoing passengers. The ADC was later successfully challenged in court by the then opposition party leaders, who are now in the government.

Some members of the current government, however, want the matter to be resolved amicably. Dhivehi Rayyithunge Party (DRP) chief Ahmed Thasmeen Ali, whose party is in the government, told PTI during his visit to New Delhi that he wants all business deals to be respected.

"We believe that it is the obligation of the government to honour all valid contracts that have been entered into by the state," he said. "We have to ensure that investor confidence is maintained and it should be dealt in a manner that it does not negatively impact investor confidence in Maldives particularly at a time when world financial crisis has made investments difficult at this stage," he added.

Ali said: "Also, it should be dealt in a manner that it does not impact bilateral relations with friendly countries". He, however, said: "We are one party. Government is supported by eight different parties. We have made our position clear. Contract should be honoured and amicable solution should be reached through negotiations".