GM braces for attacks from Democrats in Detroit debates

By David Shepardson WASHINGTON (Reuters) - General Motors Co is bracing for attacks from Democratic presidential candidates at two debates that begin on Tuesday in Detroit near its headquarters. The largest U.S. automaker preemptively released two fact sheets on its U.S 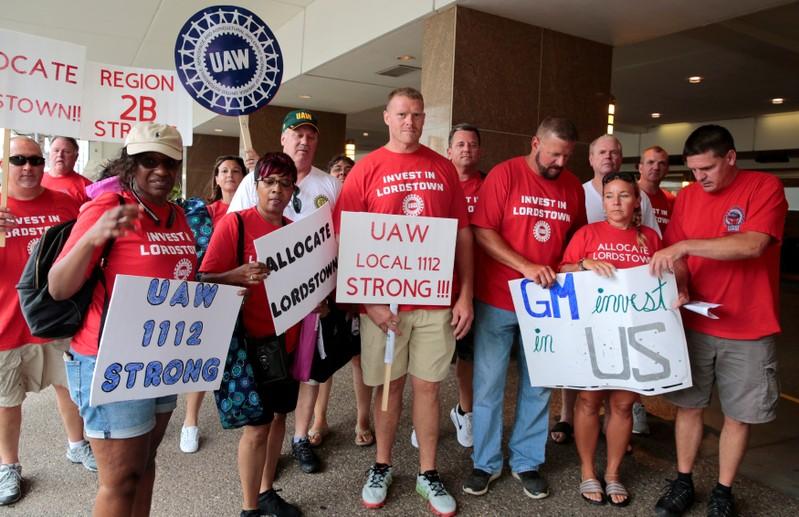 The largest U.S. automaker preemptively released two fact sheets on its U.S. operations and details about its 2009 U.S. government bailout ahead of the debates, which could feature Democrats using its high-profile job cuts to attack U.S. President Donald Trump.

GM announced in November it would cut a total of about 15,000 jobs and end production at five North American plants, included eliminating about 8,000 salaried workers.

The company came under withering criticism from Trump and many members of Congress for the cuts, which came a decade after the company was rescued by a $50 billion U.S. government bailout.

One of the plants slated for closure, Warren Transmission, is just north of Detroit and will end operations on Wednesday. The last transmission was built on Friday but there is some remaining work this week for maintenance and service parts, GM said.

On Tuesday, Democratic National Committee Chairman Tom Perez and Representative Dan Kildee will hold a press conference with workers across the street from the Warren plant "to highlight Trump’s broken promises on the economy," the DNC said in a statement. In October 2016, Trump came to Warren and said: "If I’m elected you won’t lose one plant… you’re going to have jobs again."

The UAW plans a separate media event with Warren workers on Tuesday.

GM said the end of production “is an emotional time for our Warren Transmission team members” and emphasized it wants “them to stay with the company.”

GM said last year that about 335 workers were employed at Warren Transmission, including 265 hourly workers. It said it has job opportunities for nearly all hourly employees at the plant and many have already transferred or accepted offers to transfer.

Warren is in Macomb County, which has historically been a key presidential electoral battleground in Michigan. Trump won Michigan by 10,704 votes in 2016, or a 0.23% margin.

Another of the factories set to close, GM's Detroit-Hamtramck plant, won a temporary reprieve in February when GM extended production into January 2020.

Of 2,800 U.S. hourly workers impacted by the decisions to end production at some plants, GM says it has placed more than 1,700 employees in jobs at other locations.

In May, Trump praised GM's disclosure that it was in talks to sell an idled northeastern Ohio plant to cash-strapped electric truck-building Workhorse Group Inc

In March, GM removed a Mexican-made Chevrolet Blazer from a display at Comerica Park, where the Detroit Tigers play, after some workers objected.

"GM’s operations in Mexico are not a threat to U.S. jobs," one company fact sheets states, noting GM has invested $23 billion in U.S. operations since 2009 compared with $5 billion in Mexico.

The other fact sheet says GM "repaid our debts, and we have invested tens of billions of dollars back into the United States since then."