By Marc Jones and Wayne Cole LONDON/SYDNEY (Reuters) - Wall Street saw an early surge and a rally in the dollar faded on Wednesday, as a too-close-to-call U.S. presidential election left traders betting on a divided Senate that would keep stimulus flowing but hold tax rises and regulation in check. 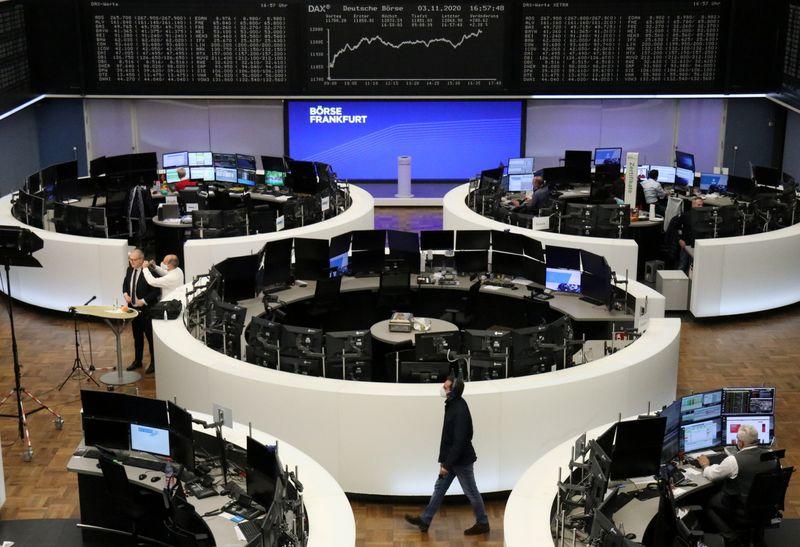 By Marc Jones and Wayne Cole

LONDON/SYDNEY (Reuters) - Wall Street saw an early surge and a rally in the dollar faded on Wednesday, as a too-close-to-call U.S. presidential election left traders betting on a divided Senate that would keep stimulus flowing but hold tax rises and regulation in check.

Wall Street started with a tech-led surge but traders had seen dizzying volatility as the razor-edged race left the final outcome in doubt for days or even weeks.

Democratic contender Joe Biden took to the air to declare he remained optimistic about winning and called for all votes to be counted, no matter how long it took.

President Donald Trump responded in trademark combative style, saying he had won, that "they" were trying to steal the election, and that he would go the U.S. Supreme Court to fight for victory.

Investors had initially wagered that a possible Democratic sweep by Biden could ease political risk and provide a boost to fiscal stimulus.

The mood quickly changed as Trump snatched Florida and Ohio and ran much closer in other battleground states than polls predicted, only to then flip again in Europe as states, such as Michigan, and betting markets leaned back to favouring Biden.

Wild futures markets had fallen when the race tightened, climbed when the voting seemed to favour Trump, dropped again when he vowed to make a Supreme Court challenge only to steady and spurt higher again. [.N]

Europe's main bourses London, Paris and Frankfurt were dragged along too. They overcame initial drops to stand 1.3%-1.8% higher having also shrugged off data showing the region heading for a double dip recession. [/EU]

"We expect an 85% likelihood of knowing the winner within ten days." However, there is a "real possibility" it could take until January, including the Senate. "This environment is conducive to volatility and a retreat towards safe havens."

(For the latest results and news on U.S. election, click: https://www.reuters.com/world/us-election2020 )

Dealers said investors may consider a status quo result would lessen political uncertainty and remove the risk a Biden administration would roll back corporate tax cuts.

The technology sector found encouragement, with NASDAQ futures surging nearly 4%. E-Mini futures were last up 1.7%, a near 3% swing from the 1% drop seen when Trump vowed to go to the Supreme Court. [.N]

Andrew Brenner, head of international fixed income at NatAlliance Securities, said the move in techs appeared to be a play on the Senate potentially staying Republican.

Brenner said that under a Biden win, tech stocks were seen faring worse, as Democrats would be expected to tackle the sector in hearings and because a potential rise in capital gains tax would hit tech stocks harder.

Stéphane Monier, CIO at Lombard Odier said a divided Congress would have "far-reaching implications for markets, mostly because it means that any kind of pandemic recovery package is still tough to approve".

TOO CLOSE TO CALL

Some investors hedged against the risk of a contested election or at least a drawn-out process as mail-in ballots were counted.

"It's a wait-and-see," said Matt Sherwood, head of investment strategy at Perpetual in Sydney.

"I think the odds of a clean (Democrat) sweep are diminishing, almost by the minute. That reduces the possibility, or the likelihood at least of a large stimulus programme being agreed to in the first days of a Biden administration."

Emerging market currencies pinballed. The Mexican peso recovered from a 2% tumble taken when the sudden chance of a Trump victory sparked nerves about U.S. trade policies continuing to favour tariffs.

Norway's crown, Australia's risk-sensitive dollar and Britain's pound were all fighting back too, China's Yuan spun to hit a 2-week high while the Russian rouble, which had been one of the hardest fallers in the election run-up, gave back overnight gains. [EMRG/FRX]

Investors await the outcome of U.S. Federal Reserve and Bank of England meetings this week, which are expected to at least give a nod to further stimulus following the latest acceleration of coronavirus

infections in Europe and the United States.

The Reserve Bank of Australia on Tuesday cut interest rates to near zero and boosted its bond-buying programme, adding to the tidal wave of cheap money flooding the global financial system.

Gold had been buoyed by the extensive liquidity but ran into profit-taking on Wednesday, losing as much 1% to $1,887 an ounce.

Oil prices overcome their own wobbles to reclaim gains made after industry data showed crude inventories in the United States dropped sharply. [O/R]

Dealers said a returned Republican administration would likely be more positive for the oil industry than the Democrats that favour renewable technology.

U.S. crude futures were up 96 cents, or 2.6% at $38.62 a barrel and Brent crude futures gained 2.9% cents to $40.86. U.S.-listed solar shares of Enphase, Sunpower, Sunrun and First Solar and Invesco's solar ETF, which have all been boosted by Biden's climate change concerns, dropped by up to 7% in pre-market trade.