By Herbert Lash and Marc Jones NEW YORK/LONDON (Reuters) - World shares strode to four-month highs on Wednesday as hopes for a coronavirus vaccine offset rising U.S.-China tensions and helped lift the euro and oil prices. Asian markets were choppy after more barbs between Beijing and Washington over Hong Kong, but gains of almost 2% in European bourses and Wall Street's advance pushed aside concerns about the still growing number of COVID cases. An experimental vaccine produced by biotech start-up Moderna Inc drew safe immune responses in all 45 healthy volunteers, an early stage trial showed on Tuesday. 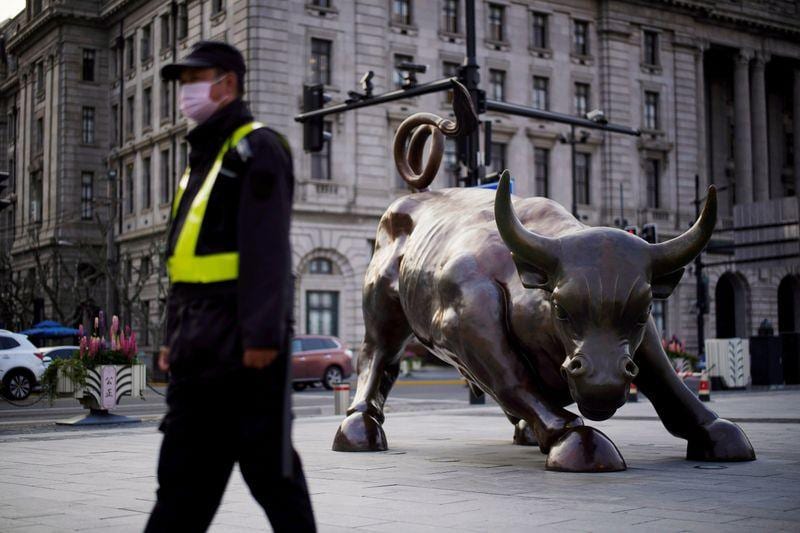 Asian markets were choppy after more barbs between Beijing and Washington over Hong Kong, but gains of almost 2% in European bourses and Wall Street's advance pushed aside concerns about the still growing number of COVID cases.

U.S. Treasury yields rose and the yield curve steepened, indicating a wider spread between long- and short-term interest rates, as hopes for a vaccine boosted risk appetite and upbeat economic data released on Wednesday added to the optimism.

U.S. industrial production, manufacturing output and plant capacity rose more than expected in June and there was a bigger- than-expected draw in U.S. crude and refined products last week as demand edges up.

Moderna surged 9% to a record high after its experimental vaccine produced high levels of virus-killing antibodies, bolstering hopes it could prove effective in later stages of testing.

Stocks that have benefited from widespread lockdowns, including Amazon

Hopes of progress this week towards a deal on the European Union's 750 billion-euro COVID recovery fund helped sentiment in Europe. The euro traded above $1.1430

The European Central Bank started a two-day meeting, though no major announcement is expected when it concludes on Thursday.

That prompted a retaliatory warning from China's foreign ministry that "Hong Kong affairs are purely China's internal affairs and no foreign country has the right to interfere."

The Bank of Japan kept its monetary policy steady, as expected, on Wednesday though it warned that uncertainty over the economic outlook was "extremely high" due to various risks, including rising coronavirus infections in Tokyo, which was put on "red alert" on Wednesday.

Oil rose on the sharp drop in U.S. inventories, but further gains were limited as the Organization of the Petroleum Exporting Countries and allies are set to ease supply curbs from August as the global economy recovers from the pandemic.

Gold prices held above $1,800 an ounce as the surge in coronavirus cases and renewed U.S.-China tensions bolstered safe-haven demand, but the rally in stocks capped the advance.