By Herbert Lash NEW YORK (Reuters) - Oil prices rose and a gauge of global equity markets hit a new high on Tuesday as investors awaited the signing of a China-U.S. trade deal they hope will spur world economic growth, after the economy in 2019 saw its weakest year since the financial crisis. Gold prices slid as the planned signing Wednesday of the Phase 1 trade deal dampened both the appeal of safe-haven bullion and the Japanese yen, which dropped to eight-month lows. 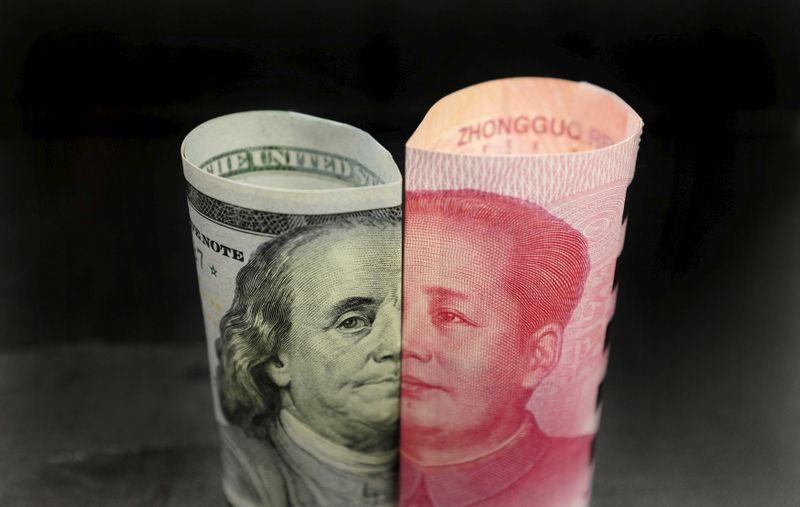 NEW YORK (Reuters) - Oil prices rose and a gauge of global equity markets hit a new high on Tuesday as investors awaited the signing of a China-U.S. trade deal they hope will spur world economic growth, after the economy in 2019 saw its weakest year since the financial crisis.

Gold prices slid as the planned signing Wednesday of the Phase 1 trade deal dampened both the appeal of safe-haven bullion and the Japanese yen, which dropped to eight-month lows.

MSCI's all-country world index and shares on Wall Street set intra-day highs before backing off a bit as investors said the long-awaited trade deal was priced into the market. Stocks in Canada and Australia also surged to records.

Stocks on Wall Street turned lower after Bloomberg reported that existing U.S. tariffs on $360 billion of Chinese imports will likely stay in place past the U.S. presidential elections in November as Washington reviews compliance with the trade pact.

Investors fear the global economy may not turn up enough to lift corporate earnings and share prices if tariffs remain in place for most of this year, said Jim Paulsen, chief investment strategist at the Leuthold Group in Minneapolis.

"People thought the tariffs would come off, the arguing would quit and manufacturing would restart across the globe," Paulsen said.

The Trump administration apparently would like to retain leverage over China to enforce the trade pact, he said, while noting that retaining the tariffs is just one factor affecting world growth, he said.

"But certainly it's worth a trading headline in the afternoon," Paulsen said.

Details are slowly emerging about the deal. China has pledged to buy almost $80 billion of additional manufactured goods from the United States over the next two years as part of a trade war truce, a source told Reuters on Monday.China would also buy over $50 billion more in energy supplies and boost purchases of U.S. services by about $35 billion over the same two-year period, the source said.

"The fact that the China thing is not getting worse and we have an agreement is lessening one of the things that could go wrong in 2020," Tuz said.

Overnight in Asia, Japan's Nikkei <.N225> added 0.7% to hit its highest level in a month. Australian shares rose by the same margin to close at a record <.AXJO>.

China's yuan was slightly weaker after earlier hitting a high last seen in July. The U.S. Treasury Department on Monday reversed its designation of China as a currency manipulator in what is seen as a conciliatory gesture before the trade deal is signed.

The trade dispute had a tangible impact on global oil demand last year, said Tamas Varga, an analyst at broker PVM. Varga pointed to 2019 demand growth of 890,000 barrels per day, compared with initial forecasts of 1.5 million barrels per day.

The weak inflation report from the Labor Department on Tuesday came on the heels of data last week showing a moderation in job growth in December. Economists said these developments were flagging a sharp slowdown in domestic demand.