By Chuck Mikolajczak NEW YORK (Reuters) - A gauge of world equities gave up early gains and turned negative on Thursday, continuing a pattern seen for the past several sessions, while the euro eased after the European Central Bank's policy announcement. In the United States, each of the major indexes were trading in negative territory as cautious trade optimism faded along with initial gains. 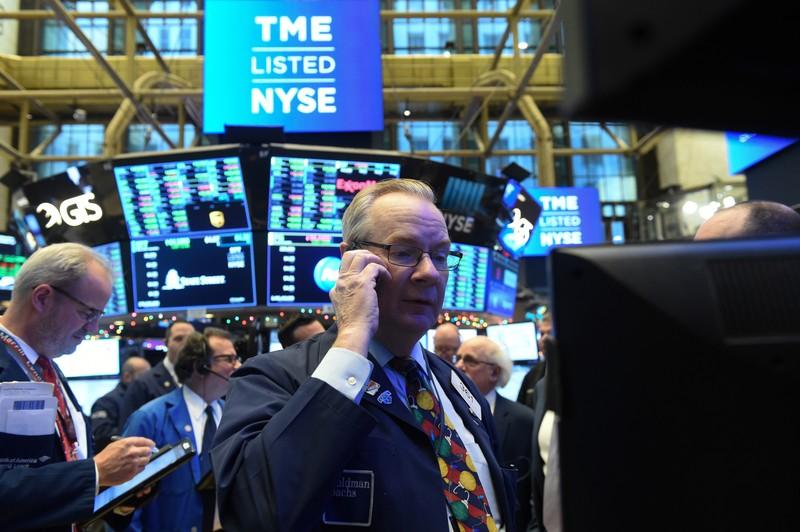 NEW YORK (Reuters) - A gauge of world equities gave up early gains and turned negative on Thursday, continuing a pattern seen for the past several sessions, while the euro eased after the European Central Bank's policy announcement.

In the United States, each of the major indexes were trading in negative territory as cautious trade optimism faded along with initial gains. Nervousness has heightened volatility in stocks recently with the S&P 500 closing on its lows in the prior session.

In Beijing, a commerce ministry spokesman said China and the United States are in close contact over trade, and any U.S. trade delegation would be welcome to visit.

Although signs of a trade thaw have been welcomed by investors, other worries have kept stocks from sustaining gains.

"Good news should make the market trade higher, there is just some overhang here," said Mark Esposito, president of Esposito Securities in Dallas.

"The overhang concerns about earnings, recession and what the Fed is doing, it continues to take the wind out of the market each time in the past few weeks we’ve seen the market try to go up."

Shares in Europe edged lower to snap a two-session win streak, as concerns about Britain's exit from the European Union and euro-zone growth outweighed a budget compromise in Italy.

The European Central Bank officially ended its post-crisis asset purchase program but promised to keep feeding stimulus into an economy struggling with an unexpected slowdown and political turmoil.

The euro and sterling were choppy on Brexit uncertainty and in the wake of comments from ECB President Mario Draghi following a central bank announcement investors viewed as dovish.

Oil prices were higher after data showed inventory declines in the United States and as investors began to expect the global oil market could have a deficit sooner than previously thought.