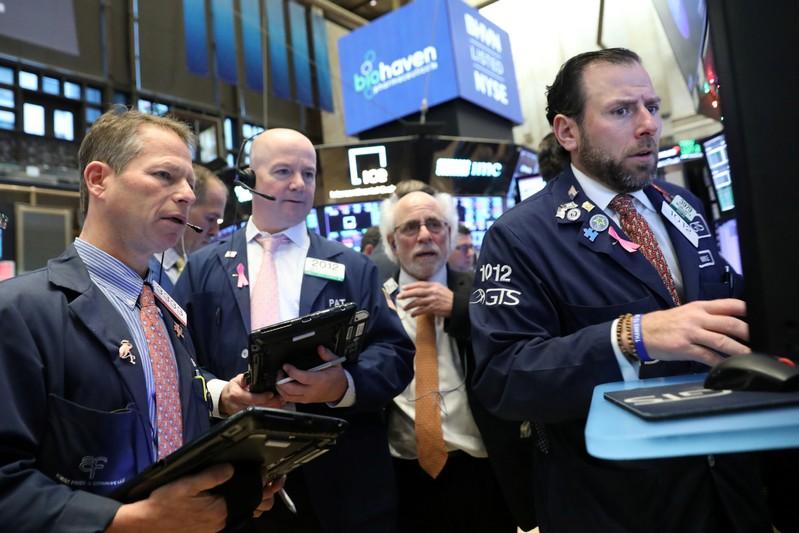 Hopes that the United States and China could call a trade war ceasefire at the upcoming G20 summit also helped stocks.

Meanwhile, the dollar retreated with potentially fewer rate increases on the horizon, and sterling rose after the Bank of England said the economy could shrink by as much as 8 percent in about a year after a no-deal Brexit.

Equity investors reacted favorably to the comments by Powell, who indicated there may not be as many future interest rate hikes from the central bank as was initially anticipated.

"He gave the market, and presumably President Trump, exactly what he wanted, which was an admission that the previously proposed path of future rate hikes was probably too aggressive," said Oliver Pursche, chief market strategist at Bruderman Asset Management in New York.

U.S. President Donald Trump has recently been critical of the Fed for raising rates.

Earlier, hopes for a U.S.-China truce on trade had also helped lift equities.

Despite Trump's tough remarks on the trade dispute ahead of Saturday's meeting with Chinese President Xi Jinping, markets focused on comments by White House economic adviser Larry Kudlow, who indicated the two countries could call a truce.

"If they come out with nothing this weekend, it's going to be very bad," said Bernd Berg, global macro strategist at Swiss-based Woodman Asset Management.

Still, lingering caution that the two sides would leave the summit without an agreement capped gains in Europe, where auto stocks were under pressure after a report Trump may soon impose new import tariffs.

A rapprochement between the United States and China is seen as crucial, given that world growth and trade are already showing signs of an alarming slowdown.

Uncertainty over global trade as well as Brexit and Italy's conflict with the European Union, had supported the U.S. dollar, but the dollar index <.DXY> dipped 0.35 percent after Powell's comments.

Sterling, meanwhile, gained 0.7 percent after the Bank of England warned about the economic risks from exiting the European Union without a deal.

It said, Britain risks suffering an even bigger hit to its economy than during the global financial crisis 10 years ago if it leaves the European Union in a worst-case Brexit scenario.

"Our jobs is not to hope for the best but to prepare for the worst," BoE Governor Mark Carney said.

Some market participants took the remarks as a good sign.

“I think he's assuaging fears, saying that they’re willing to do anything they need to do,” said Michael Skordeles, U.S. macro strategist at SunTrust Advisory Services in Atlanta, regarding the bank’s response to Brexit. “That’s helping global markets generally.”

Oil slipped below $60 a barrel, continuing a recent run of losses, after U.S. crude inventories rose for the 10th week in a row and investors worried about whether OPEC-led producing countries would reach an accord next week on output cuts.