By David Randall NEW YORK (Reuters) - World equity benchmarks reversed course after hitting a five-month peak on Monday while safe-haven U.S. government bonds and gold gained, as optimism about a global economic recovery was overtaken by renewed fears amid record numbers of new coronavirus cases in the U.S. MSCI's gauge of stocks across the globe briefly touched its highest level since February before ending down 0.29%. 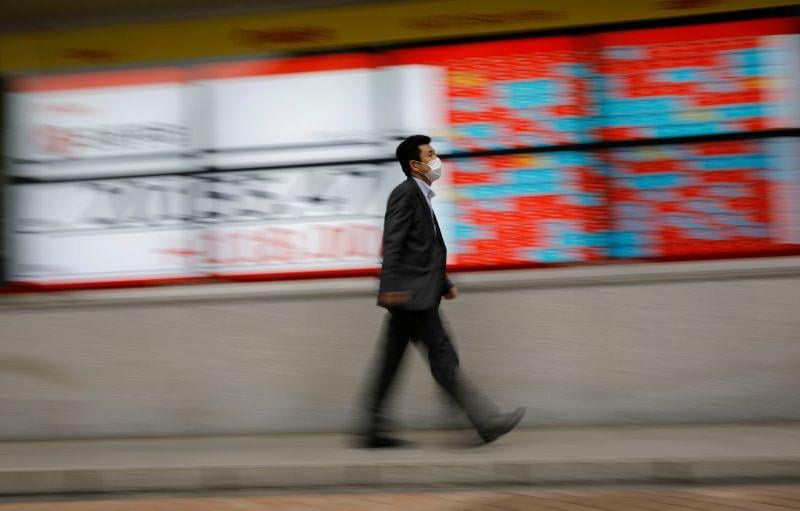 NEW YORK (Reuters) - World equity benchmarks reversed course after hitting a five-month peak on Monday while safe-haven U.S. government bonds and gold gained, as optimism about a global economic recovery was overtaken by renewed fears amid record numbers of new coronavirus cases in the U.S.

MSCI's gauge of stocks across the globe <.MIWD00000PUS> briefly touched its highest level since February before ending down 0.29%.

"Equity indices are clearly trying to look through into Q3 and beyond, but with the U.S. struggling to shake off the coronavirus phase one, this should be factored into equity risk premia," Raymond James European strategist Chris Bailey said.

Losses accelerated in U.S. afternoon trading after California ordered new lockdown measures, including shutting bars and banning indoor dining at restaurants statewide to combat the surge in infections. School districts in Los Angeles and San Diego announced they will offer online-only instruction in the fall.

The stock market reversal helped the dollar pare losses, finishing down less than 0.1% against a basket of major currencies. The euro, meanwhile, rose 0.5% to $1.135 to maintain its slow uptrend since late last month. Looming large for the common currency was a planned EU summit on July 17-18, where leaders need to bridge gaps on long-term budget and economic stimulus plans. [FRX/]

"If an agreement weren't to be reached there, then they still expect one within weeks. It's worth remembering that there are a number of complex issues to be worked out," Deutsche Bank strategist Jim Reid said.

Super-low rates have been a boon for non-yielding gold, which hovered near nine-year highs after five straight weeks of gains. Spot gold