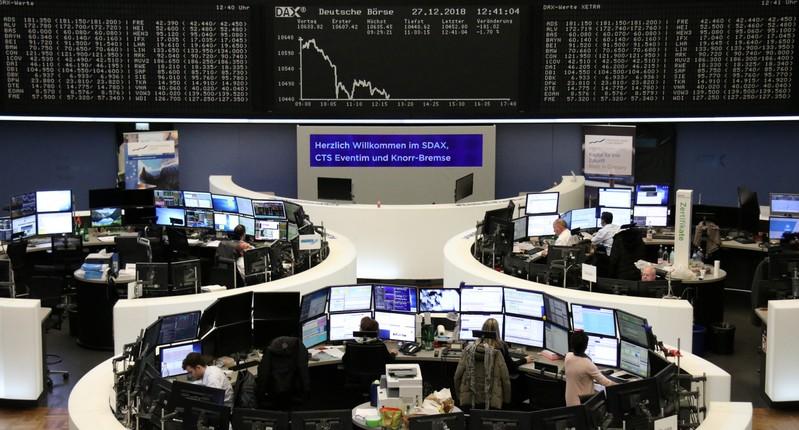 U.S. stock indexes seesawed, making it difficult to end one of the most brutal December selloffs in memory on a high note.

MSCI's index of global equities <.MIWD00000PUS> gained 0.57 percent to bring the global benchmark to a weekly advance near 2 percent.

Markets swung wildly in a week shortened by the Christmas holiday, starting with Wall Street's worst-ever Christmas Eve drop, pushing the S&P 500 to within a whisker of bear market territory.

But efforts at a late Santa Claus rally failed to salve investors after a year that brought gains for very few categories of financial assets, from stocks to bonds and commodities. The global MSCI index, the S&P 500, the Dow and the Nasdaq are each headed for their worst years since the 2008 financial crisis.

The dollar index <.DXY> dipped 0.14 percent, with the euro

That has boosted gold, a traditional safe haven whose appeal this year was hit by a stronger dollar, which makes the yellow metal more expensive to buyers with other currencies. Gold

Breaking with the bad news, the Chicago Purchasing Management Index came in ahead of consensus.

"If we get the transmission mechanism of a lower dollar, stocks outside the U.S. are set up for a good 2019," Bailey said. "Once people get their heads around the fact the U.S. is not going to have yet another double-digit return year in 2019, you can look elsewhere."

That would be a relief to world markets that largely underperformed the United States in 2018.

Oil prices lifted a bit off two-year lows after a near 40 percent decline this quarter with U.S. West Texas Intermediate crude