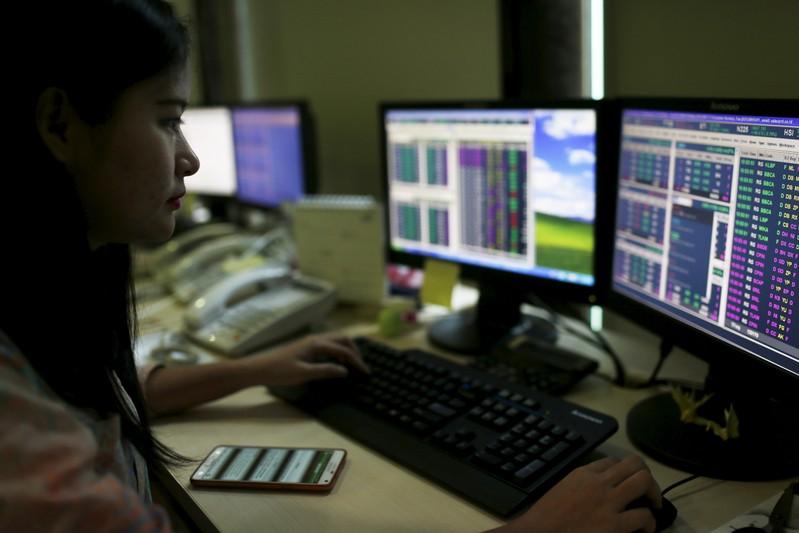 The U.S. dollar rose as the British pound fell on news that Brexit negotiations with the European Union over Northern Ireland remained in flux and as the euro continued its slide on political uncertainty over Italy's budget.

Falling stocks boosted demand for low-risk debt, though gains were limited as investors remained on edge with rising inflation pressures and further potential interest rate hikes by the Federal Reserve.

The third-quarter earnings season and U.S. midterm elections also weighed on investor enthusiasm, along with the rising dollar, according to money managers.

"People are looking at the negatives and saying that it's a situation where there are more headwinds. At least until the midterms, it's going to be difficult to make any significant progress on the upside. The drift will be lower," said Alan Lancz, president, Alan B. Lancz & Associates Inc., an investment advisory firm in Toledo, Ohio.

Investors looked ahead to the peak week for the U.S. earnings season, with Amazon, Alphabet, Microsoft and Caterpillar among the companies reporting.

Helped by a strong economy and deep corporate tax cuts, S&P 500 earnings per share are expected to grow 22 percent in the third quarter, according to I/B/E/S data from Refinitiv.

"There's some nervousness ahead of that," said Paul Nolte, portfolio manager at Kingsview Asset Management in Chicago.

Sterling , meanwhile, slipped 0.8 percent against the dollar. British Prime Minister Theresa May said the majority of Britain's deal to exit the EU has been agreed upon but repeated her opposition to an EU proposal regarding the Irish border, according to excerpts from her statement to Parliament.

Brazilian stocks were the biggest gainers in Latin America, with emerging market sentiment boosted as China promised to provide stimulus to stabilise its economy and offset the impact of U.S. tariffs.

After rising as much as 0.7 percent earlier in the day, European stocks ended lower as relief over Moody's decision to keep Italy's sovereign rating outlook stable was short-lived and the focus turned to Europe's response to Rome's budget plans. [.EU]

Asian stocks rose after China promised to stabilise its economy and offset the impact of U.S. tariffs.