By Lawrence White and Julie Zhu LONDON/HONG KONG (Reuters) - Stocks, oil and risk currencies, including bitcoin, gained on Tuesday as U.S. President-elect Joe Biden got the formal go-ahead to begin his transition to the White House. The world's most popular cryptocurrency rose 3% to near its record high, leading a surge in risk appetite as the European STOXX 600 index climbed 0.6% and Brent crude rose to its highest level since March at $46.52 a barrel 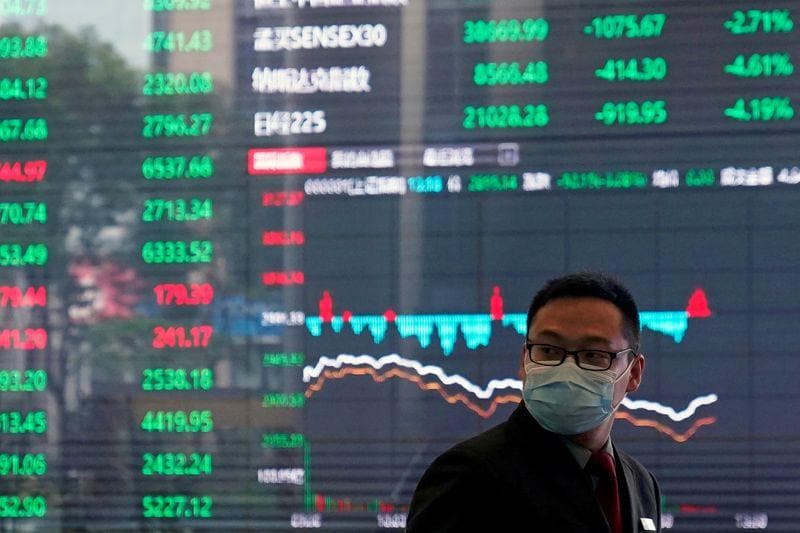 By Lawrence White and Julie Zhu

LONDON/HONG KONG (Reuters) - Stocks, oil and risk currencies, including bitcoin, gained on Tuesday as U.S. President-elect Joe Biden got the formal go-ahead to begin his transition to the White House.

The world's most popular cryptocurrency rose 3% to near its record high, leading a surge in risk appetite as the European STOXX 600 index climbed 0.6% and Brent crude rose to its highest level since March at $46.52 a barrel. Safe-haven assets such as gold fell.

After weeks of legal challenges to the election results, U.S. General Services Administration chief Emily Murphy wrote to Biden on Monday informing him the formal handover process could begin.

President Donald Trump tweeted that he had told his team "do what needs to be done with regard to initial protocols", an indication he was moving towards a transition.

"Markets have been constrained by very high levels of uncertainty on the U.S. political front and around vaccines for weeks, so with those two going away investors are considering the prospect of a return to normality in 2021," said Emmanuel Cau, head of European equity strategy at Barclays.

Japan's Nikkei jumped 2.5% to its highest level since May 1991 overnight, with energy, real estate and financial shares leading the advance.

Asia-Pacific shares outside Japan had ticked up 0.4%. Australia's S&P/ASX 200 was 1.26% stronger, touching its highest level in almost nine months, with energy stocks leading the pack there.

AstraZeneca and Oxford University said on Monday that their COVID-19 vaccine, which is cheaper to make, easier to distribute and faster to scale up than its rivals, could be as much as 90% effective.

The progress made on COVID-19 vaccines helped drive risk appetite, as investors looked past short-term economic pain from the pandemic to a brighter 2021.

The New Zealand dollar was also among the currency gainers, rising as much as 0.9% to a two-year high of $0.6986 as its central bank said house prices, which have been climbing higher this year, could be included in its inflation basket.

The euro was gaining towards $1.19 again and the dollar index, which tracks the dollar against a basket of six major currencies, nudged down to 92.242.

Bitcoin broke past $19,000 for the first time in nearly three years, as demand for assets perceived as resistant to inflation grows.

Also spurred on by the vaccine hopes, oil reached levels not seen since before the coronavirus pandemic began to spread in March.

Amid the gains on Tuesday, however, were some reminders of how the COVID-19 pandemic is inflicting economic pain. Germany's gross domestic product grew by a record 8.5% in the third quarter, but the Ifo institute's survey of business morale pointed to fears of a recession to come as the index fell to 90.7 from a downwardly revised 92.5 in October.

The Turkish lira fell almost 1.5% to trade at 7.9899 per dollar, its weakest since Nov. 11, as new coronavirus restrictions began and investors look for signs of sustained central bank support.

In the bond markets, the yield on the U.S. benchmark 10-year notes rose slightly to 0.87% as did those on most European government bonds. Germany's 10-year yield was up 1 basis point to -0.58% in morning trade.