By Ekaterina Kravtsova LONDON (Reuters) - Asian spot prices for liquefied natural gas (LNG) fell for the fifth week in a row with no signs of demand picking up as temperatures remained above average in Asia-Pacific, allowing Europe to absorbing supplies. Spot prices for March delivery to Asia this week dropped to around $8.00 per million British thermal units (mmBtu), down 20 cents from the previous week, trade sources said 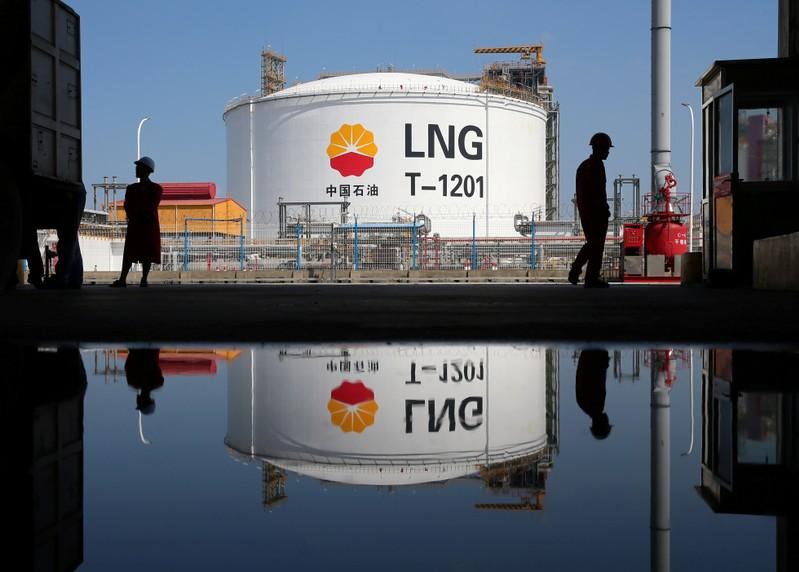 LONDON (Reuters) - Asian spot prices for liquefied natural gas (LNG) fell for the fifth week in a row with no signs of demand picking up as temperatures remained above average in Asia-Pacific, allowing Europe to absorbing supplies.

Spot prices for March delivery to Asia this week dropped to around $8.00 per million British thermal units (mmBtu), down 20 cents from the previous week, trade sources said.

Lacklustre Chinese demand was illustrated by China National Offshore Oil Corp (CNOOC) reselling a spare cargo on board the Neo Energy tanker that had loaded in November and had been kept offshore in case of a surge in consumption.

CNOOC is offering out the Neo Energy, as well as the Hoegh Esperanza, which it used as a floating storage and regasification unit (FSRU) this winter, shipbrokers said. This is another sign of China's weak demand.

Some market players continue to reschedule deliveries to Asian buyers, with one source saying a cargo was pushed back to November from March.

Trading house Trafigura and energy major Shell offered March cargoes in Asia at $8.00-8.20/MMbtu in the Platts window, but had to lower offers to $7.75-7.85/MMbtu due to a lack of interest. No transactions took place by the time of publication.

Outages at Australia's Gorgon plant and Indonesia's Bontang did not help prices to firm. At Bontang, where a train is offline until next week, Pertamina indicated it may require a vessel to load a cargo in mid-February, signalling production is stable, shipbrokers said.

Indonesia's Donggi Senoro LNG is selling two March cargoes in a tender closing Jan. 30, according to the Platts window.

In the Atlantic basin, Angola LNG offered a February cargo in a tender, while India's Gail offered six cargoes for 2020 from its offtake from U.S. Sabine Pass and Cove Point in two tenders that closed this week.

Falling Asian prices coupled with robust European gas hub prices, used as benchmarks for LNG trades, have led to an influx of cargoes to Europe, now the largest buyer of U.S. LNG.

But even here, LNG prices are falling, with two traders saying spot cargoes are now heard at discounts to British and Dutch natural gas prices, against which they are normally at premium.

"Europe is at discount over indexes ... Even Spain is coming flat to TTF (the Dutch gas hub price)," one European-based trade source said.

A U.S. cargo was sold to Spain for delivery in late February below the Dutch gas benchmark, another trader said. Another U.S. cargo is on offer for March delivery to Europe.

Charter rates for vessels with modern propulsion dropped to $60,000s per day this week, a half of where the rates were in late December, and are expected to keep falling as more vessels becoming available, shipbrokers said.