By Naomi Tajitsu TOKYO (Reuters) - Carlos Ghosn improperly received $9 million in compensation from a joint venture (JV) between Nissan Motor and Mitsubishi Motors, the Japanese automakers said on Friday, raising the possibility of their ousted chairman facing a fresh charge of embezzlement. In the latest twist to the saga of the once-feted official's fall from grace, the automakers have found that Ghosn was paid by their Netherlands-based JV without the knowledge of the unit's two other directors - Nissan Motor CEO Hiroto Saikawa and Mitsubishi Motor CEO Osamu Masuko. 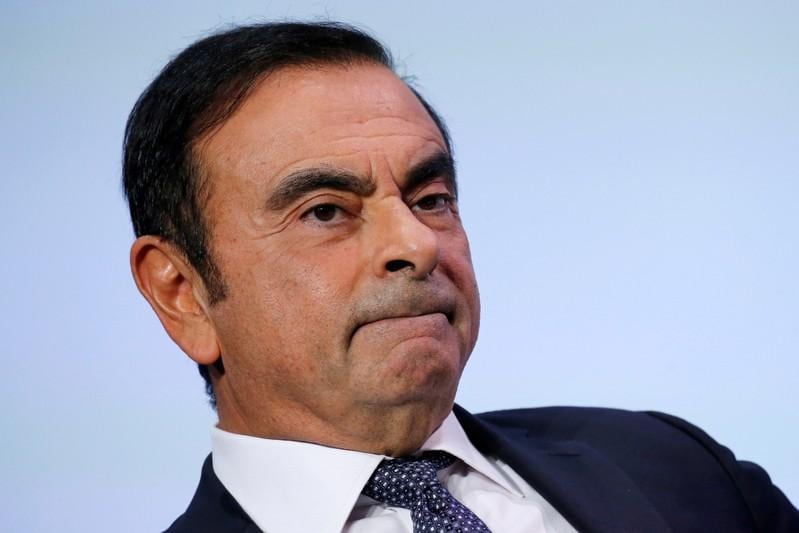 TOKYO (Reuters) - Carlos Ghosn improperly received $9 million in compensation from a joint venture (JV) between Nissan Motor and Mitsubishi Motors, the Japanese automakers said on Friday, raising the possibility of their ousted chairman facing a fresh charge of embezzlement.

In the latest twist to the saga of the once-feted official's fall from grace, the automakers have found that Ghosn was paid by their Netherlands-based JV without the knowledge of the unit's two other directors - Nissan Motor CEO Hiroto Saikawa and Mitsubishi Motor CEO Osamu Masuko.

Ghosn, arrested and detained in Tokyo for about two months, has already been indicted on charges of under-reporting his income for eight years at Nissan through March 2018, and temporarily transferring personal investment losses to the automaker during the global financial crisis.

"That such misconduct also occurred at our affiliate is beyond shocking ... it's sad," Masuko told reporters, referring to the payments made to Ghosn from Nissan-Mitsubishi B.V., registered in the Netherlands in 2017.

Both Mitsubishi and Nissan said they would consider ways to recover the amount from Ghosn, while Mitsubishi lawyer Kei Umebayashi said a criminal charge was also possible.

"The most likely charge for this would be embezzlement," he told reporters at a briefing.

According to Mitsubishi's legal team, over April-November 2018, Ghosn received around 5.8 million euros ($6.61 million) in annual pay for his role as managing director, a 1.4 million euro signing fee and an undisclosed incentive from the JV.

Reuters reported earlier this week about the alleged improper compensation to Ghosn by the JV and that Nissan was considering filing for damages, citing a source.

The unit had been intended to fund expenses for the partnership including consultant fees, joint promotional activities, workspace use and corporate jets, Masuko said.

Ghosn's lawyer, Motonari Otsuru, could not be immediately reached by telephone for a comment on Friday. Ghosn has denied all previous charges against him.

The arrest of Ghosn, who spearheaded Nissan's turnaround two decades ago, and the list of charges against him have jolted the auto industry, while muddying the outlook for Nissan's three-way alliance with Mitsubishi and France's Renault SA.

Renault has come under a lot of pressure in recent days from its biggest shareholder, the French government, to replace Ghosn as its CEO and chairman. The automaker has kept him at its helm, even as Nissan and Mitsubishi moved swiftly to oust him as chairman after his arrest.

The French automaker, however, confirmed on Thursday that it was considering new leadership, after Finance Minister Bruno Le Maire called publicly for a board meeting to address his succession.

Ghosn's pay has been a hotly debated issue at Renault's shareholder meetings where he lost a vote on pay a few years ago. He has also been in news previously for hidden bonus plans.

Reuters reported in 2017 on a plan by Renault-Nissan bankers to pay millions in undisclosed bonuses via a specially created Dutch service company to Ghosn and other managers. The plan was scrapped after the Reuters report.

Renault owns around 43 percent of Nissan, the biggest firm in the alliance by sales and which in turn has a non-voting 15 percent stake in Renault. Mitsubishi became the smallest member when Nissan in 2016 took a 34 percent stake in it. ($1 = 0.8776 euros)