By Michael Nienaber BEIJING (Reuters) - Germany and China on Friday signed agreements to strengthen coordination in banking, finance and capital markets, and pledged to further open market access and deepen cooperation to broaden economic ties. The agreements were reached after a two-day visit to Beijing by German Finance Minister Olaf Scholz for talks with Vice Premier Liu He, who is President Xi Jinping's top economic adviser. Both sides reaffirmed that 'they will strengthen macroeconomic policy coordination and pragmatic cooperation in the fiscal and financial fields and expand strategic cooperation,' according to a joint statement after the talks. 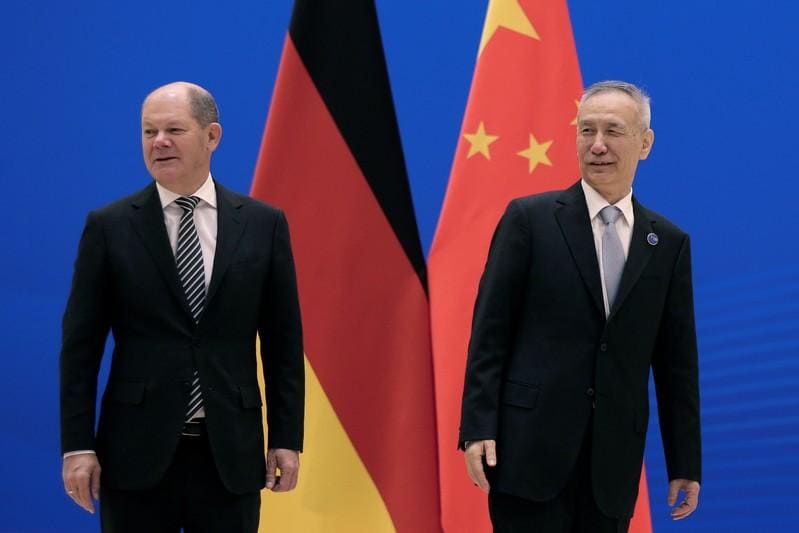 The agreements were reached after a two-day visit to Beijing by German Finance Minister Olaf Scholz for talks with Vice Premier Liu He, who is President Xi Jinping's top economic adviser.

Both sides reaffirmed that "they will strengthen macroeconomic policy coordination and pragmatic cooperation in the fiscal and financial fields and expand strategic cooperation," according to a joint statement after the talks.

Trade between the two nations has softened amid uncertainty caused by the U.S.-China trade war, but both have shown a willingness to demonstrate that the world remains multilateral.

"It is important that, contrary to recent trends that we can observe elsewhere, we are seeing progress in our cooperation," Scholz told reporters before the talks at the Diaoyutai State Guest House in the Chinese capital.

A level playing field in terms of market access for banks and insurers is important, added Scholz.

"If you work closely together, you learn to appreciate similarities, but also to know differences," Scholz said.

"And we have a lot of common interests in financial matters, and then we need to bring different perspectives together. I believe that is the very important task of this financial dialogue," he added.

German-Chinese cooperation benefited their economies, Liu and Scholz said, adding they are committed to ensuring open market access and easing investment barriers in both countries.

German insurers can set up wholly-owned insurance holding firms in China, whose insurers and reinsurers are welcome conduct reinsurance business in Germany, it said.

German banks can apply to become a primary dealer in the open market operations of the People's Bank of China (PBOC).

The two countries will also support efforts to find areas of cooperation between China's Belt and Road initiative and the EU's strategy for linking Europe and Asia, as well as European infrastructure planning.

"I am very happy that we have succeeded in agreeing concrete, very concrete steps today," Scholz said. "There must be a level playing field, reciprocity is the key."