By David Randall NEW YORK (Reuters) - Levi Strauss & Co's is betting it can convince investors there is still plenty of global growth left for the 165-year old company, but fund managers fret the iconic blue jeans maker's stock may be too pricey to generate a decent return. The San Francisco-based company returned to the public markets Thursday for the first time since it went private through a leveraged buyout in 1985 with a stock debut that sold $587 million worth of shares and gave it a market value of more than $8.7 billion . 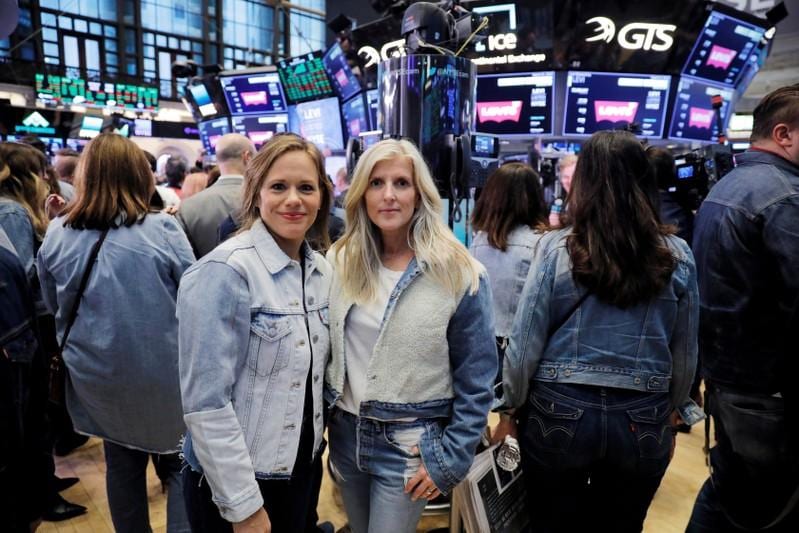 NEW YORK (Reuters) - Levi Strauss & Co's is betting it can convince investors there is still plenty of global growth left for the 165-year old company, but fund managers fret the iconic blue jeans maker's stock may be too pricey to generate a decent return. The San Francisco-based company returned to the public markets Thursday for the first time since it went private through a leveraged buyout in 1985 with a stock debut that sold $587 million worth of shares and gave it a market value of more than $8.7 billion .

In its prospectus, Levi's said it plans to expand its women's clothing line and grow in markets such as China, which represented just 3 percent of its net sales in 2018. Levi's shares jumped more than 30 percent, which has mutual fund managers questioning whether a long-term investment in the denim company would be profitable.

"It's a mature company that already has broad distribution and its customer base is shrinking because department stores are shrinking," said Chris Terry, a portfolio manager at Dallas-based Hodges Capital Management.

Unlike companies like Under Armour Inc, whose shares are up nearly 22 percent year-to-date, Levi's does not "have a ton of room to expand the brand" because it is already so well-known, Terry said.

The newly-public company would also face increased competition for fund managers' attention if VF Corp spins off Western jeans brand Wrangler's, as expected in the first half of 2019. Wrangler's also sells apparel, including cowboy hats, shirts, and jackets.

"With Wrangler, you get Western wear, which is probably a larger secular growth opportunity" than denim alone and has only one other major competitor in Boot Barn Holdings Inc, Terry said. Year-to-date, shares of Boot Barn are up more than 56 percent.

Robert Bacarella, portfolio manager of the Monetta Fund, said concerns over Levi's expansion plans outweigh the attractiveness of its brand name at its current price.

"We're all sitting around here asking, 'Where's the growth?'" he said. "If they can come out with a plan to show that they can grow market share and not be as dependent on retail stores then it becomes a lot more interesting."

With its long history, the company comes to the public markets at a time when the most anticipated initial public offerings are technology companies tied to the growth of the smartphone.

The average age of companies that have debuted so far in 2019 is four years, according to Kathleen Smith, principal at Renaissance Capital.

Fellow Bay Area companies Lyft, Uber Technologies Inc, AirBnb Inc and Pinterest, which are all expected to go public this year, have all been founded in the last 11 years.

Concerns about Levi's growth rate would have been alleviated if its shares had remained near the $15 initial midpoint of the IPO pricing, or roughly seven and a half times its earnings before interest, taxes, and amortisation, said Arun Daniel, a portfolio manager at J O Hambro Capital Management.

"They could see double-digit growth in the women's category by taking share from competitors like Guess, which would be interesting because then you're getting both the brand and growth and it becomes an attractive story for 3 to 5 years," Daniel said. "But it all comes down to price."