By Michel Rose, Gwénaëlle Barzic and Allison Lampert PARIS/MONTREAL (Reuters) - France ruled out a possible $20 billion takeover of Carrefour by Alimentation Couche-Tard on food security grounds on Friday, prompting the Canadian firm and its allies to mounted a last-ditch attempt to salvage a deal. The French move, with ministers shooting down the offer less than 24 hours after talks were confirmed, sparked disquiet in some business circles over how French President Emmanuel Macron decides which foreign investment is welcome and which is not. 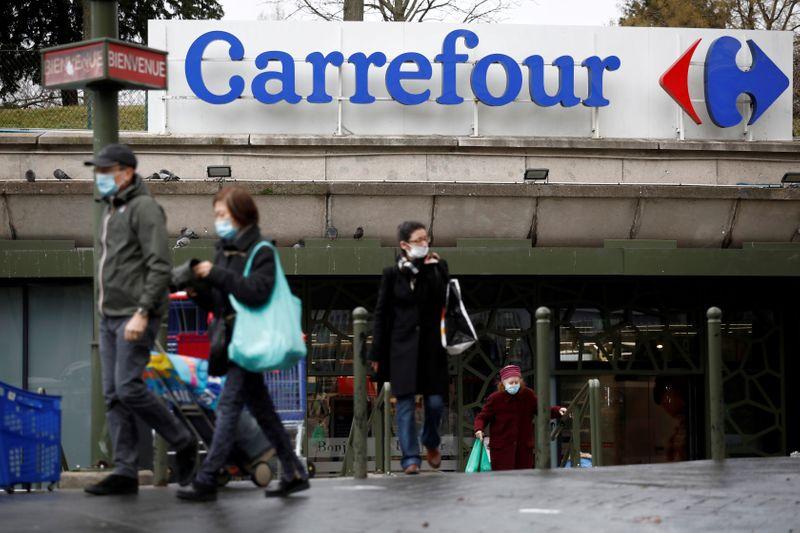 PARIS/MONTREAL (Reuters) - France ruled out a possible $20 billion takeover of Carrefour by Alimentation Couche-Tard on food security grounds on Friday, prompting the Canadian firm and its allies to mounted a last-ditch attempt to salvage a deal.

The French move, with ministers shooting down the offer less than 24 hours after talks were confirmed, sparked disquiet in some business circles over how French President Emmanuel Macron decides which foreign investment is welcome and which is not.

Some politicians and bankers said the push back could tarnish Macron's pro-business image, while others highlighted that the COVID-19 crisis had forced more than one country to redefine its strategic national interests.

"Food security is strategic for our country so that's why we don't sell a big French retailer. My answer is extremely clear: we are not in favour of the deal. The no is polite but it's a clear and final no," Finance Minister Bruno Le Maire said.

The comments sparked a trans-Atlantic flurry of lobbying and a meeting of Couche-Tard founder Alain Bouchard with Le Maire in Paris, a finance ministry spokesman said.

Prime Minister Justin Trudeau, asked about the prospects for a deal, said he would always be there to help Canadian firms succeed internationally and he spoke this week to Macron.

Pierre Fitzgibbon, the economy minister of Quebec, where Couche-Tard is headquartered, said he too was scheduled to speak to Le Maire on Friday.

"From a business perspective, it's still on," Fitzgibbon told reporters, adding that the focus was to reassure Paris that the deal would not jeopardise French food security.

Carrefour, which acknowledged Couche-Tard's approach to discuss a combination on Wednesday, had no immediate comment.

The slapdown was a surprise for Carrefour executives, a source familiar with the matter said, while people close to Couche-Tard said it was also startled by the French rhetoric.

The COVID-19 pandemic has thrust supermarkets into the spotlight globally as they worked to keep customers fed and supplied with household basics like toilet paper.

But with just under 20% of France's groceries market held by Carrefour, behind local rivals like Leclerc, some people questioned whether Carrefour met the threshold for being strategic, and therefore ringfenced from a foreign takeover.

"If you take such a broad view of the sectors you believe are strategic, it starts to create a problem for foreign investors who need visibility," Olivier Marleix, a French member of parliament from opposition party Les Republicains, said.

Pascal Dupeyrat, a French lobbyist specialising in corporate takeovers at Relians, said jobs were likely to be Macron's big concern less than two years from a presidential election.

With around 105,000 French staff, Carrefour is the country's top private employer, and an acquirer could take a more drastic stance on its underperforming out-of-town hypermarkets.

France has long been a combative protector of its interests, a mantle taken up even by Macron, a former investment banker, when he came to power in 2017.

The president pushed to renegotiate the terms of a Franco-Italian shipping deal soon after his election, though as economy ministry he also oversaw the sale of companies like telecoms group Alcatel, which ended with job cuts under new owner Nokia.

The Carrefour fallout could further muddle his record, despite efforts to woo international funds with "Choose France" summits and a reform drive.

France's Medef business lobby said the government had condemned the deal too hastily, before giving Couche-Tard a chance to offer any guarantees.

"Our foreign businesses regularly buy companies overseas, so Paris must not take an overly protectionist stance that could prevent such deals from happening," Medef said.

A Couche-Tard takeover of Carrefour had yet to fully convince investors and analysts, who questioned the lack of geographical overlap between the North American gas station operator and continental Europe's largest retailer.

This raised questions over the potential for costs savings. Couche-Tard was prepared to offer guarantees on jobs and pledge between 2 and 3 billion euros of investment over five years, a source familiar with the matter said.

Carrefour shares were down some 4% in French afternoon trading, with Couche-Tard up by around 1% in Canada.