Foxconn's Gou says may run for Taiwan president, step back from daily business

By Yimou Lee TAIPEI (Reuters) - Foxconn's Chairman Terry Gou said on Tuesday he is considering whether to run for Taiwan's 2020 presidential election, a day after Reuters reported the tycoon planned to step down from the world's largest contract manufacturer. Speaking on the sidelines of an event in Taipei, Gou declined to say which party he could represent, although any bid could shake up the political playing field at a time of heightened tensions between the self-ruled island and Beijing 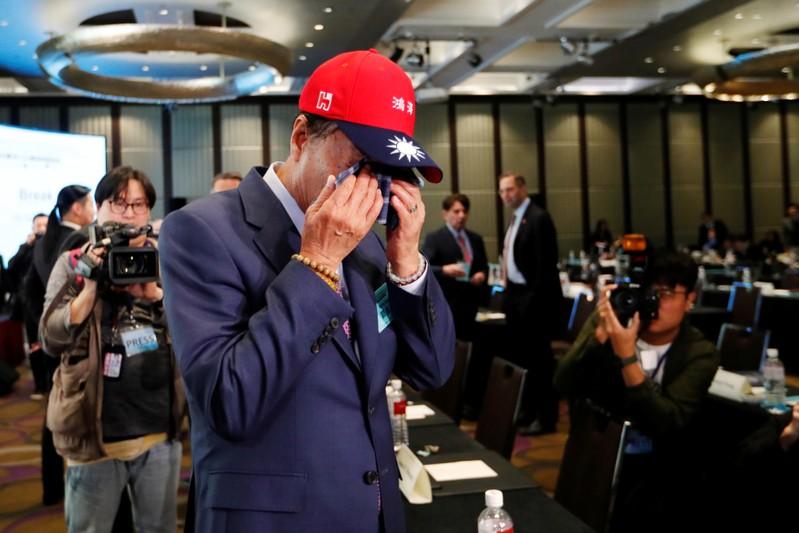 TAIPEI (Reuters) - Foxconn's Chairman Terry Gou said on Tuesday he is considering whether to run for Taiwan's 2020 presidential election, a day after Reuters reported the tycoon planned to step down from the world's largest contract manufacturer.

Speaking on the sidelines of an event in Taipei, Gou declined to say which party he could represent, although any bid could shake up the political playing field at a time of heightened tensions between the self-ruled island and Beijing.

If it was the opposition, China-friendly Kuomintang (KMT), he would "go" with the standard procedures of the party, Gou said, adding he would make that decision "as soon as possible".

"I didn't sleep last night ... 2020 is key for Taiwan. The reason for the tense situation (with China) is because it's a turning point for Taiwan's direction for politics, economy, defence for the next 20 years," Gou said.

"So I asked myself the whole night ... I need to ask myself what I can do. What I can do for the youth? ... The next 20 years will decide their fate," he said, his eyes welling up with tears at times.

The KMT said in a statement Gou had been a party member for more than 50 years and had given it an interest-free loan of T$45 million ($1.5 million) in 2016 under the name of his mother, a move that signalled his "loyalty" to the party.

The KMT did not immediately respond to a media enquiry on whether Gou was eligible to participate in the party's already highly competitive primary election.

Gou, Taiwan's richest person with a net worth of $7.6 billion according to Forbes, told Reuters on Monday he planned to step down in the coming months to pave the way for younger talent to move up the company's ranks.

The company later said Gou will remain chairman of Foxconn, though he plans to withdraw from daily operations.

Taiwan is gearing up for presidential elections in January at a time of heightened tensions across the Taiwan Strait, with Chinese bombers and warships conducting drills around the island on Monday.

A senior U.S. official denounced the military manoeuvres as "coercion" and a threat to stability in the region.

Some observers said Washington was likely to greet any presidential bid by Gou with caution.

"I don't think the United States would be too happy to see him running because he is close to China and, right now, the U.S. is wary about China," said Shane Lee, political scientist at Chang Jung University in Taiwan.

"PEACE IS THE BIGGEST WEAPON"

China claims Taiwan as its own and has vowed to bring the island, which it regards as a sacred territory, under Chinese control, by force if necessary.

The United States has no formal ties with Taiwan but is bound by law to help provide the island with the means to defend itself and is its main source of arms.

"We need peace. We don't need to buy too many weapons. Peace is the biggest weapon," Gou said, adding that Taiwan only needs adequate self-defence.

"If we spend the money for weapons on economic development, on artificial intelligence, on investment in the United States, this would be the biggest assurance on peace."

"Whose children are willing to sit in those fighter jets?"

A source with direct knowledge of the situation said Gou was likely to announce his decision on the presidential bid later on Tuesday at the earliest and was due to travel to Foxconn's factory in the southern Chinese city of Shenzhen on Wednesday.

Shares of Foxconn, which is formally known as Hon Hai Precision Industry Co Ltd and has a market value of around $40 billion, closed 0.7 percent higher on Tuesday.

An official at Taiwan's stock exchange told Reuters there were no regulations related to a company executive running for the island's presidency.

Taiwan's pro-independence Democratic Progressive Party is expected to announce a presidential candidate in May, with contenders including President Tsai Ing-wen and her former premier, William Lai.

Asked by Reuters on Monday if he would quit as chairman, Gou said, at 69 years old, he was moving in that direction, though any decision needed to be discussed with Foxconn's board.

"I don't know where you got the information from. But I have to say, basically, I'm working towards that direction - to walk back to the second line, or retire," Gou said.

"In the board meeting in April-May we will give the new list of board members to the board," Gou said without elaborating.

Founded in 1974, the Foxconn group is the world's biggest contract manufacturer with T$5.2 trillion ($168.52 billion) in annual revenue. It assembles goods for a miscellany of global tech firms but relies on Apple Inc for over half of annual revenue, analysts said.