By Nick Carey DETROIT (Reuters) - Ford Motor Co said on Wednesday it will reshuffle workers at several of its plants to meet rising demand for pickup trucks and large SUVs, a process that will require finding new positions for 150 workers displaced by the changes but not result in job cuts. 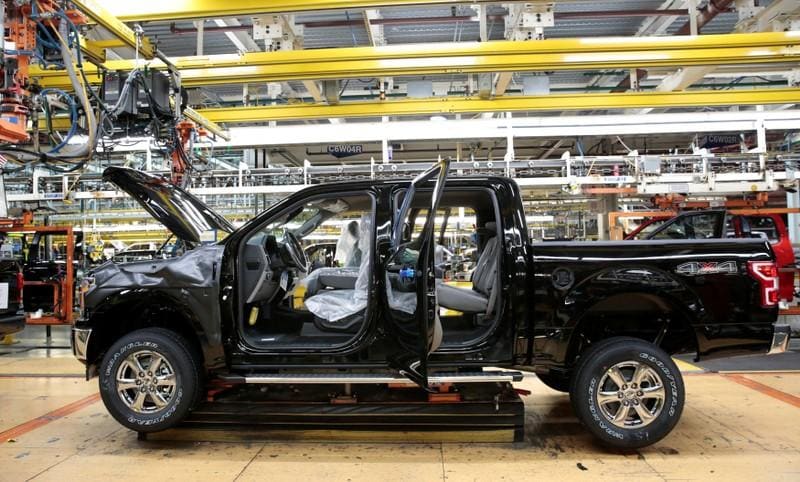 The changes also will not require adding new jobs.

The No. 2 U.S. automaker said it will shift 500 workers from one Kentucky plant making crossover vehicles to another that makes its best-selling F-Series pickup trucks, plus the Ford Expedition and the Lincoln Navigator, both large SUVs.

In addition, Ford has a new midsize pickup, the Ranger, coming to the market next year.

The Dearborn, Michigan-based automaker also said it would move 500 jobs to a Michigan plant making transmissions for popular pickup trucks from one nearby that will reduce production to one shift making Mustangs and the Lincoln Continental.

Ford said an additional 150 workers from the Flat Rock, Michigan, assembly plant would receive job offers at other plants. A company spokeswoman said Ford was "highly confident" that jobs would be found for all those workers and there would be no job losses as a result of this reshuffling.

The United Auto Workers union, which represents hourly workers at Ford, said in a statement, "after working with Ford, we are confident that all impacted employees will have the opportunity to work at nearby facilities."

That announcement has drawn the ire of Republican President Donald Trump, who has threatened to eliminate subsidies for GM. One of the four U.S. plants expected to close is a car factory in northeast Ohio, a state critical to victory in the 2020 presidential campaign.

According to a Reuters analysis of industry production and capacity data, GM's plans will only partially close the gap between capacity and demand for the automaker's sedans.

Sales of the Ford Expedition were up 4 percent through the first 10 months of 2018, while sales of the high-margin Lincoln Navigator spiked nearly 81 percent during that period.