Forced to step down, Naresh Goyal now returns to put in bid for cash-strapped Jet Airways

Etihad Airways too has joined the list of those who have submitted Expression of Interest (EoI) to buy a stake in the cash-strapped airline, said a report in The Times of India.

Goyal quit as chairman of the carrier last month under a debt resolution plan that saw lenders taking control of the airline.

It couldn't be immediately ascertained whether he has partnered with any entity or airline for the bid.

Friday was the last date for initial bids set by SBI Capital Markets. 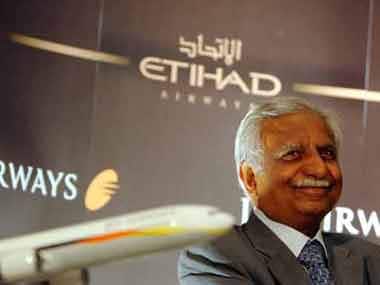 SBI Caps has the mandate for Jet Airways' sale on behalf of the SBI-led consortium of the domestic lenders to the debt-ridden private carrier.

The bidding norms allow Goyal to participate in the sale process.

"It could be financial investor, it could be airline...including Naresh Goyal himself or Etihad. Nobody is barred from bidding or taking over the airline as per the rule," SBI chairman Rajnish Kumar said last month.

Last month, Goyal and his wife Anita Goyal stepped down from the board of the airline, which has more than Rs 8,000 crore debt.

Meanwhile, the crisis in Jet Airways has deepened as the airline could operate only 11 aircraft on Friday, leaving passengers stranded at various domestic and international airports and prompting the Prime Minister's Office (PMO) to hold an urgent meeting to discuss the situation.

On Thursday, the crisis-ridden airline extended suspension of its international operations till next Monday due to severe liquidity issues.

It also suspended operations to the entire Eastern and Northeastern markets as it was forced to ground 10 more aircraft following default of lease rentals.

This has left Jet with no large aircraft while it had just 14 planes for domestic operations as of late Thursday.

"Jet has decided to extend suspension of its international operations till Monday, due to severe cash crunch," airline sources told PTI.

Jet was the largest domestic carrier operating in the international sector with a hub in Amsterdam, where a cargo agent had taken possession of an aircraft  on Tuesday demanding bill payment. This led to the cancellation of the Amsterdam-Mumbai flight that day.