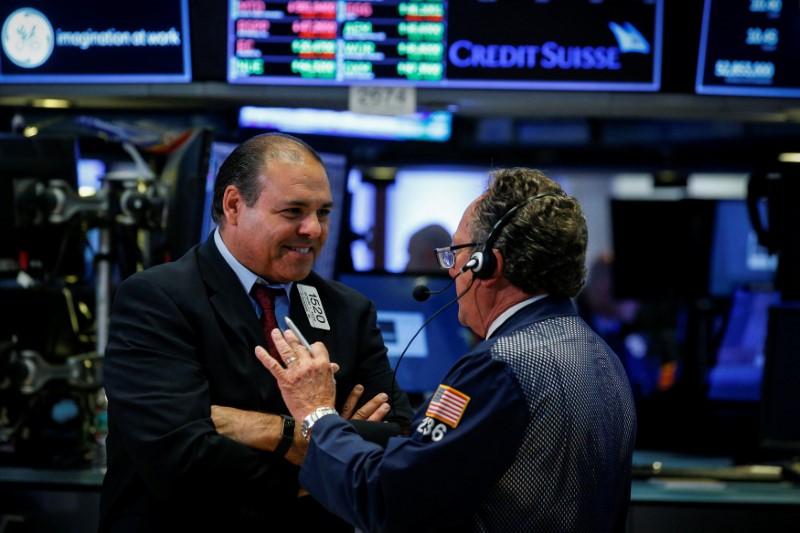 Amazon.com became the second company after Apple to top $900 billion in market value, before reversing course to trade lower.

Berkshire Hathaway's Class B shares jumped 5.8 percent after the conglomerate eliminated a restriction on its ability to buy back its stocks.

Financials rose 1.56 percent, the most among the 11 major S&P sectors, followed by the industrial group's 1.19 percent increase.

Boosting the industrial sector was strong earnings from railroad CSX Corp and United Airlines that helped ease concerns about the impact of the trade dispute on domestic hauls. A 6.6 percent rise in shares of CSX was the biggest boost to the Dow Jones Industrial Average and pushed railroad operators higher. UAL also raised its 2018 profit forecast, sending its shares up 8.4 percent and lifting airline stocks.

"Markets are going to stay a little range bound and are trying to grind a little bit higher in the midst of slower trading," said Mark Heppenstall, chief investment officer at Penn Mutual Asset Management, in Horsham, Pennsylvania.

As more S&P companies report earnings, the estimate for second-quarter profit has increased to 21.2 percent from 20.7 percent on July 1, according to Thomson Reuters I/B/E/S.

Federal Reserve Chairman Jerome Powell told the members of a House committee that rising world protectionism would over time pose a risk to a U.S. and global expansion.

"Powell's testimony is the big topic of the day, but I don't think he's going to say anything that will tip the scales or drive the markets meaningfully one way or the other," said Heppenstall.

Seven of the 11 main S&P 500 sectors were lower, led by the defensive utilities and consumer staples sectors.

IBM dipped 0.3 percent, while American Express gained 1.4 percent ahead of their results after the bell.

The S&P index recorded 26 new 52-week highs and no new lows, while the Nasdaq recorded 80 new highs and 38 new lows.