By Agnieszka Flak MILAN (Reuters) - New Fiat Chrysler boss Mike Manley was handed extra responsibilities for the carmaker's European business on Monday when a fellow executive quit after being passed over for the top job, adding to the challenges Manley faces. Jeep division head Manley was named on Saturday to succeed Chief Executive Sergio Marchionne, one of the auto industry's most tenacious and respected leaders, who fell seriously ill after suffering complications following surgery. Fiat Chrysler Automobiles (FCA) said on Monday that Alfredo Altavilla, head of its business in Europe, Middle East and Africa had resigned and those responsibilities would go to Manley on an interim basis. 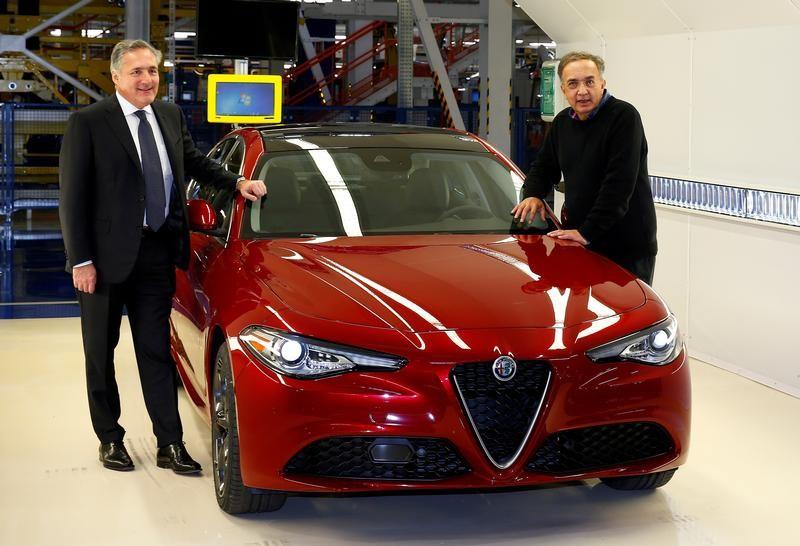 MILAN (Reuters) - New Fiat Chrysler boss Mike Manley was handed extra responsibilities for the carmaker's European business on Monday when a fellow executive quit after being passed over for the top job, adding to the challenges Manley faces.

Jeep division head Manley was named on Saturday to succeed Chief Executive Sergio Marchionne, one of the auto industry's most tenacious and respected leaders, who fell seriously ill after suffering complications following surgery.

Fiat Chrysler Automobiles (FCA) said on Monday that Alfredo Altavilla, head of its business in Europe, Middle East and Africa had resigned and those responsibilities would go to Manley on an interim basis.

Altavilla, who joined Fiat in 1990, had been a rival for the top job along with Manley and CFO Richard Palmer.

Marchionne had been due to step down next April as head of the world's seventh largest carmaker, so the market reaction to his sudden departure was relatively limited. The shares initially fell more than 5 percent, but then pared some losses and were down 1.7 percent by 1510 GMT.

"The downside may be modest, at least in the next 12 months. But long-term concerns will build – Marchionne ran FCA in a command and control style, with constant firefighting measures," said Bernstein analyst Max Warburton.

FCA has pledged to increase production of sport utility vehicles and invest in electric and hybrid cars to double operating profit by 2022. It also unveiled bold targets for Jeep, which has become FCA's ticket to creating a high-margin brand with global appeal.

The future appears less clear at Ferrari , which Marchionne had been due to lead until 2021, having spun off the luxury carmaker more than two years ago. Ferrari shares lost almost 5 percent.

FCA's group executive council was meeting at FCA's Italian base in Turin on Monday, chaired for the first time by Manley.

Analysts said choosing the 54-year-old Manley, under whose watch Jeep's sales surged fourfold, sent a clear message that FCA was staying on course and would keep the Jeep brand at the heart of its growth plan.

Under Manley, the company is expected to sharpen its focus on revamping individual brands, including ailing Fiat in Europe, Chrysler in the United States and Alfa Romeo, which has yet to turn a profit despite multibillion-euro investments.

Marchionne, widely credited with rescuing both Fiat and Chrysler from the brink of bankruptcy, had focused on fixing FCA's finances first, notably erasing all debt.

He was a gift to investors, including Italy's Agnelli family, through 14 years of canny dealmaking, growing Fiat's value 11 times, helped by spinoffs of tractor maker CNH Industrial NV and Ferrari NV. The Agnellis still have a controlling interest in all three companies.

But his track record at fixing some of FCA's brands was mixed, with investments and product launches repeatedly delayed.

Profitability in Europe is only gradually recovering, FCA has yet to make significant inroads in China, and the company relies on North America for three-fourths of profits just as that market is expected to come off its peaks.

Marchionne had advocated industry mergers to share the cost of building electric, hybrid and self-driving cars, but gave up the quest when his preferred target, General Motors Co, rejected his advances.

FCA said on Saturday that Manley would execute the new strategy to ensure a "strong and independent" future, but for some investors future M&A remained part of the investment case.

"Like for others in the auto sector, a tie-up seems ultimately inevitable for FCA," said Stefano Fabiani, a fund manager at Milan-based Zenit SGR.

"I believe there will be opportunities on a 18-24 months horizon which they won't be able to refuse, that's part of the reason I hold on to the stock,"

In the absence of a partner, Manley needs to show FCA can keep churning out profits on its own, even as emissions rules tighten, SUV competition intensifies and worries over potential U.S. emissions fines abound.

"FCA has a defined way forward, the management was chosen by Marchionne which reassures, and the choice to focus on Jeep is a winning bet, but I still plan to sell for now to lock in a profit as the sudden change creates uncertainty," said Umberto Borghesi, chief investment officer at London-based Albemarle Asset Management. "We need to see if they can execute the plan."

The script is less well defined for new Ferrari CEO Louis Camilleri after his promotion.

Ferrari announced some midterm targets this year - pledging to double core earnings and churn out hybrids and an SUV - but a detailed strategy was due in September.

Camilleri "inherits an absurd valuation, a product plan that's far from settled internally and 2021 financial targets that Sergio scribbled on a napkin and that may be difficult to deliver," Bernstein's Warburton added.

Marchionne made some bold choices in recent years, notably raising production beyond a self-imposed cap, but was always careful to not dilute the brand's exclusivity.

Analysts questioned whether Camilleri would be able to do the same and grow Ferrari beyond what it is today while keeping dealers, racing fans, owners and collectors on board.

"(Ferrari) will always be like a fine race car. Marchionne increasingly had it tuned to perfection," said George Galliers, an analyst at Evercore ISI. "It has to be seen if it can remain so without him."

(Additional reporting by Danilo Masoni in Milan and Pamela Barbaglia in London; Editing by Keith Weir)