By Howard Schneider WASHINGTON (Reuters) - The U.S. faces only moderate financial risks despite elevated asset prices and concern over the possible impact of rising corporate debt, U.S. Fed chairman Jerome Powell said on Wednesday as the central bank released a broad overview of the health of credit markets and the financial system. 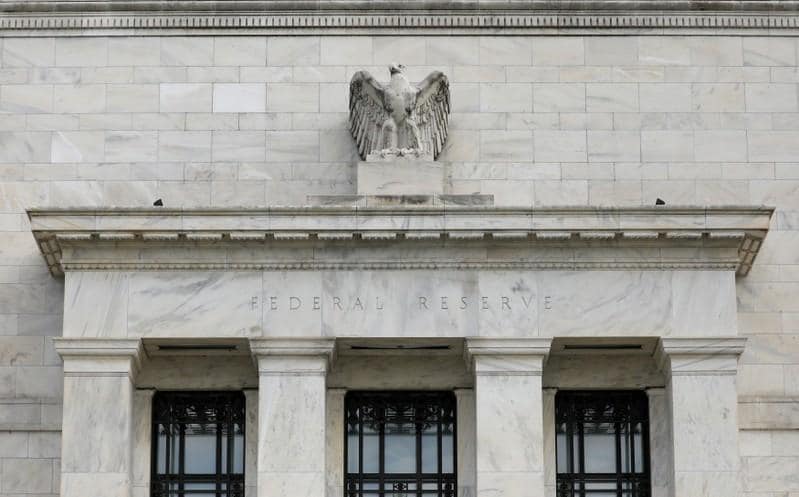 WASHINGTON (Reuters) - The U.S. faces only moderate financial risks despite elevated asset prices and concern over the possible impact of rising corporate debt, U.S. Fed chairman Jerome Powell said on Wednesday as the central bank released a broad overview of the health of credit markets and the financial system.

The report flagged tensions over trade, the turbulent Brexit discussions, and trouble in China and emerging markets as shocks that could rock a U.S. financial system in which asset prices are "elevated" and business credit quality may be "deteriorating."

But in a speech following the release of the report, Powell said "overall financial stability vulnerabilities are at a moderate level...The risks of destabilizing runs are far lower than in the past. The institutions at the heart of the financial system are more resilient."

"We do not detect a broad-based buildup of abnormal or excessive leverage," of the sort that, as in the 2007 to 2009 financial crisis, led lending to evaporate and amplified what became the worst economic downturn since the Great Depression, Powell said.

The report is the first of what the Fed intends as a twice a year exercise in flagging risks and delving deep into the weeds of the massive U.S. private credit system -- from bank funding to household credit card default levels and into the thicket of issues like hedge fund borrowing that even the central bank cannot fully surveil.

Publishing the report regularly bolsters the Fed's ongoing moves towards greater public transparency about how the central bank uses its broad powers -- a step Powell has said is important to sustain the Fed's continued independence from elected officials in setting monetary policy. In this case it also, subtly, states the case for why regulatory changes made since the financial crisis a decade ago are worth the cost.

"After 10 years of concentrated effort in the public and private sectors, the system is now much stronger, with greater capacity to function effectively in stressful times," Powell said.

The report noted several ways in which the financial system is well-buffered. It cited the strong capital position of banks, household borrowing generally in line with incomes, and a system now less vulnerable to the sort of runs or credit crunches that nearly shut down the global economy in the 2007 to 2009 financial crisis.

But the report also noted that stock prices are high by some measures, commercial real estates values have been "growing faster than rents," and that lendershave been freely funding risky corporate loans.

“Business sector debt relative to (gross domestic product) is historically high and there are signs of deteriorating credit standards," the Fed report stated .

Should any of a number of outside shocks occur, such as an escalating trade war between the U.S. and major trading partners, a messy breakup between Britain and the European Union, or an emerging markets crisis, "the resulting drop in asset prices might be particularly large."

The report even highlighted the Fed's own policy decisions as a risk, saying markets globally needed to adjust to rising interest rates, and "some adjustments could occur abruptly."

Yet even in areas where the Fed report indicated potential trouble, the risks were muted. For example "risky" debt held by companies, either junk bonds or leveraged loans, has surged in recent months and now tops $2 trillion. But default rates remain low and the cost of debt service as a share of company earnings has been level and near a 20-year low.

Overall borrowing among households and nonfinancial businesses "has advanced roughly in line with economic activity," the report stated, and remains well below the highs hit ahead of the financial crisis.

The Fed has included its views on financial stability in other documents and presentations.

But giving financial stability a marquee publication of its own shows the importance the issue has taken on as Fed officials strive to avoid the mistakes that led to the 2007 financial crisis. Powell recently said policymakers had suffered "a failure of imagination" back then regarding how central financial stability was to the economy.