By Jonnelle Marte and Howard Schneider BOSTON/WASHINGTON (Reuters) - In their last public comments before the Federal Reserve's next interest-rate decision, U.S. central bankers on Friday left the door open to a further reduction in borrowing costs as they continue to assess how household spending, the main driver of U.S. economic growth, is holding up 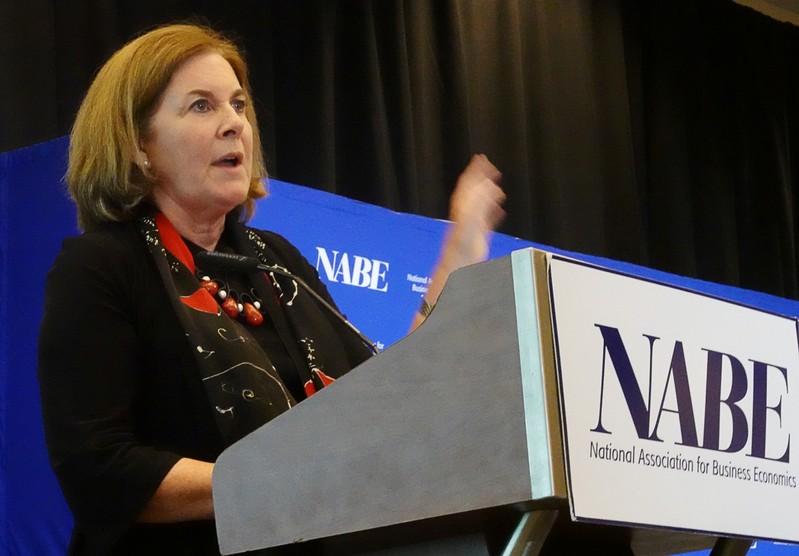 By Jonnelle Marte and Howard Schneider

BOSTON/WASHINGTON (Reuters) - In their last public comments before the Federal Reserve's next interest-rate decision, U.S. central bankers on Friday left the door open to a further reduction in borrowing costs as they continue to assess how household spending, the main driver of U.S. economic growth, is holding up.

So far, signals are mixed. While traders are betting heavily on what would be a third rate cut this year at the Fed's Oct. 29-30 meeting, it is unclear whether Fed policymakers overall will support such a move. In September, the median of the Fed's 17 policymakers thought just two rate cuts in 2019 would be appropriate.

Since that meeting, jobs growth has slowed and retail sales unexpectedly dropped, possible signals that a decline in manufacturing brought on by the U.S.-China trade war may be spreading more broadly through the economy.

At the same time, household debt levels remain low and consumer spending is still on pace to grow by 2.5% this year, Fed Vice Chair Richard Clarida said on Friday.

"I don’t see any evidence right now that recession risks are elevated," Clarida, the Fed's No. 2 official said at an event in Boston. "And I don’t see that spilling into the consumer."

His speech echoed that of Fed Chair Jerome Powell two weeks ago that was seen as signalling another interest rate cut at the central bank's next meeting. It was also in line with those of other policymakers who emphasized this week that they are open minded about future policy decisions.

The Fed cut interest rates for the first time in more than a decade in July. It did so again at its subsequent policy meeting in September in what Powell and some others have characterized as "insurance" against headwinds to the economy from slowing global growth and the U.S.-China trade war.

Since the meeting, U.S. manufacturing activity tumbled to a more than 10-year low and service sector activity fell to a three-year low in September.

But consumer spending, which accounts for roughly two thirds of U.S. activity, remains key as policymakers weigh whether more cuts are needed. U.S. retail sales fell for the first time in seven months in September, data on Wednesday showed.

"I think the data has come in since the last meeting generally softer; generally it's been a little bit more downside than I would have expected at the September meeting," Minneapolis Fed President Neel Kashkari said in Des Moines on Friday.

With the Fed's policy target range for overnight rates of 1.75%-2.00% currently above the yield on the 10-year Treasury, interest rates may be restraining the economy when in his view they ought to be "somewhat accommodative," given the risks, he said.

"I don't want to prejudge what the committee will do, but I think we are all trying to be data dependent, and as the data moves, I think our outlooks tend to adjust," Kashkari said.

Dallas Federal Reserve bank president Robert Kaplan said at an event in Washington that he is currently "agnostic" about a third rate in October.

"This could break either way," said Kaplan, who like Kashkari is not a voter on Fed policy this year. Despite risks tilted towards a worse-than-expected economic outcome, "it may be wise to take a little time to assess and continue to turn over a few more cards."

Kansas City Fed President Esther George, who has dissented from both rate cuts this year, signalled she would again argue against reducing borrowing cuts at the Fed's next meeting.

"My own outlook for the economy does not call for a monetary policy response," George said. "While weakness in manufacturing and business investment is evident, it is not clear that monetary policy is the appropriate tool to offset the risks faced by businesses in those sectors when weighted against the costs that could be associated with such action."

The only data that would change her view would be something showing U.S. consumers really beginning to suffer from the effects of trade uncertainty and slowing growth.

"Should downside risks spill over...in a way that fundamentally affects the consumer and shifts the overall outlook, a monetary policy response may be required," George said.