By Dan Burns and Howard Schneider (Reuters) - Top U.S. economic policymakers opened the door on Tuesday to further aid for small businesses hit by the coronavirus-triggered recession, but differed over how broad it might extend and the manner in which it should be delivered 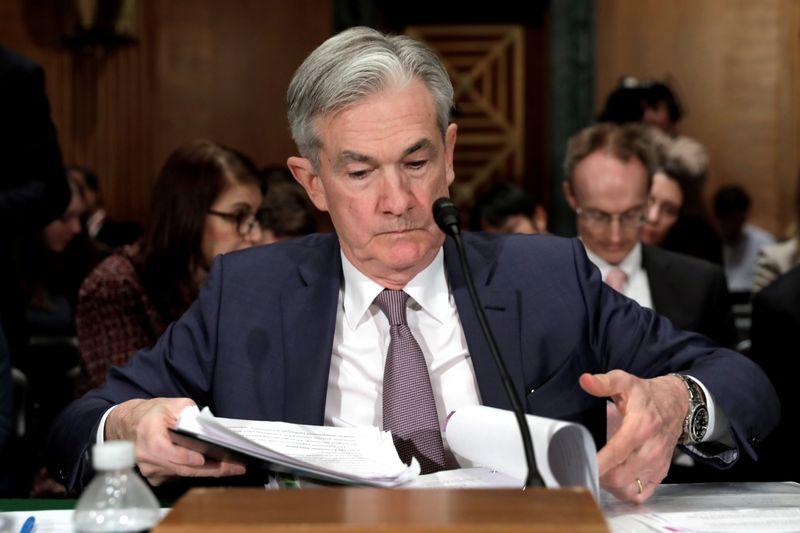 By Dan Burns and Howard Schneider

(Reuters) - Top U.S. economic policymakers opened the door on Tuesday to further aid for small businesses hit by the coronavirus-triggered recession, but differed over how broad it might extend and the manner in which it should be delivered.

In testimony before the House of Representatives Financial Services Committee, Treasury Secretary Steven Mnuchin and Federal Reserve Chair Jerome Powell were pressed by lawmakers concerned the multi-trillion-dollar effort to battle the economic fallout from the pandemic had left a broad swathe of businesses vulnerable, from the smallest corner restaurants to commercial office properties and hotels.

Mnuchin and Powell said they were looking for ways to extend more help, but also that they were hitting legal and practical limits that might require action by Congress to avoid.

Fed loans backed by commercial buildings as collateral, for example, were often prohibited by existing lending agreements that forbid the owners from further borrowing, Powell said. And proposals that the U.S. central bank loosen requirements for its Main Street Lending Program to make it more accessible to smaller firms, he said, overlooked the fact that larger businesses have been the ones interested in central bank credit.

"There is very little demand below a million dollars," Powell said in response to Mnuchin's suggestion that the minimum loan size under the facility could be lowered from $250,000 to $100,000.

Help for small businesses, Powell said, would better come through another grant-type program like the Paycheck Protection Program because "trying to underwrite the credit of hundreds of thousands of small businesses would be very difficult," for the Fed.

Tuesday's hearing, which came six months into the pandemic and six weeks before the Nov. 3 presidential election, highlighted the crossroads the economy seems to be facing.

After a historic crash during March and April, when many stores were shut down, the rebound has been surprisingly strong. About half of the 22 million jobs lost in March and April have been recovered, and Powell said there had been "marked improvement" in many other economic measures.

But the coronavirus is still rampant, and there is a broad sense among economists, including at the Fed, that the recovery will lapse if further government support is not provided, in particular to families and small businesses.

Powell on Tuesday noted that much of the recent healthy economic data resulted from spending under the $2.3 trillion CARES Act. Approved in March as the foundation of the government's economic response to the pandemic, it authorized the Treasury to fund an array of Fed lending and credit programs, including the Main Street facility, as well as make direct payments to individuals, provide enhanced unemployment benefits, and give small business PPP loans that are intended to be forgiven.

The result was not only a jobs rebound, but a steadying of personal incomes and jump in personal savings accounts that Powell said had made the economy "resilient" to the run of loan defaults, evictions and other problems feared when the recession hit.

Since many of those programs have lapsed, "the risk is that (people) go through those savings, and they haven't been able to find employment ... Their spending will decline, their ability to stay in their homes will decline. The economy will begin to feel those negative effects," Powell said.

The fate of small businesses, the main driver of U.S. employment but also one that is vulnerable to cash flow disruptions and short of credit, is key to shaping how fast and broad the recovery will be.

Powell, Mnuchin and lawmakers agreed further help for the sector is needed.

Yet there was no quick path offered.

The Fed has been stung by criticism its much-vaunted "Main Street" program has done little actual lending. Of $600 billion in potential loans, about $2 billion has been processed since the program opened in June.

But Powell said the solution was not to lower the minimum loan size or open the program to a class of borrower the Fed would find it difficult to judge creditworthy.

Rather he said something like the PPP, a program that in effect acts as a taxpayer-funded small business grant, "is a better way to approach that space."

Mnuchin said the Trump administration agrees and would be open to repurpose some funds already allocated by Congress.

But Mnuchin added he also felt follow-up programs should be targeted more narrowly to rebuild jobs or focus on businesses, including restaurants, that have been damaged more deeply by the pandemic.

Congress, for its part, is at a stalemate over providing further coronavirus-related aid, with dwindling expectations for action on any bill before the November election.

The improvement Powell noted in the economy comes with important footnotes. Despite the rebound in employment, the economy remains around 11 million jobs below where it was in February.

Full recovery, Powell said, will also hinge on whether the virus is controlled and "is likely to come only when people are confident it is safe to reengage in a broad range of activities."

Until then, he repeated, further fiscal help will likely be needed to avoid the worst.

Tuesday's hearing was the first of three featuring Powell this week. On Wednesday, he is due to appear before the House Select Subcommittee on the Coronavirus Crisis. On Thursday, Powell and Mnuchin will testify before the Senate Banking Committee.

(Reporting by Dan Burns in Connecticut, Ann Saphir in Berkeley, Calif., and Andrea Shalal and Howard Schneider in Washington; Editing by Matthew Lewis and Paul Simao)