By Shrutee Sarkar and Rahul Karunakar (Reuters) - A quarter-point Federal Reserve interest rate cut in July is almost a done deal, according to economists in a Reuters poll, who expect another later in the year amid rising economic risks from the ongoing U.S.-China trade war. Expectations in the July 16-24 poll for the first rate cut in more than a decade have firmed this month after several Fed members have strongly hinted policy easing is coming soon, pushing U.S. stocks to new record highs. 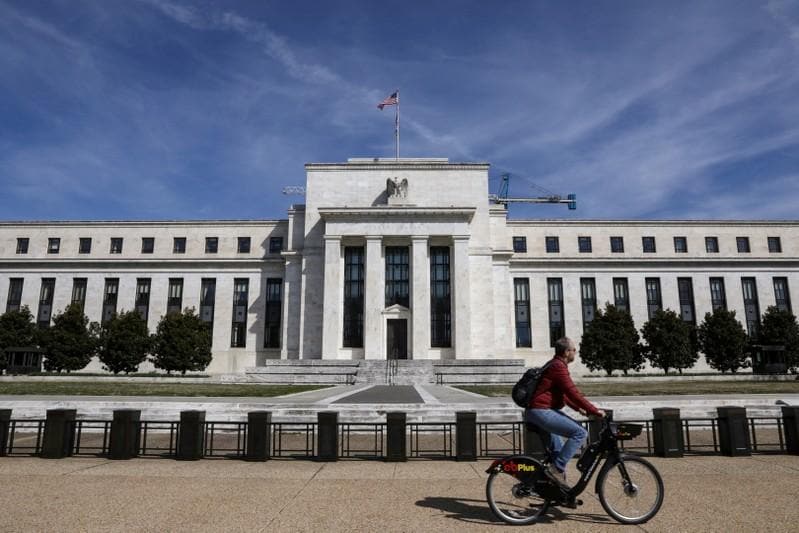 By Shrutee Sarkar and Rahul Karunakar

(Reuters) - A quarter-point Federal Reserve interest rate cut in July is almost a done deal, according to economists in a Reuters poll, who expect another later in the year amid rising economic risks from the ongoing U.S.-China trade war.

Expectations in the July 16-24 poll for the first rate cut in more than a decade have firmed this month after several Fed members have strongly hinted policy easing is coming soon, pushing U.S. stocks to new record highs.

While that lines up with most major central banks, which have turned dovish in recent months, the latest poll shows economists, like financial markets, have settled on a 25 basis point cut in the federal funds rate to 2.00-2.25% rather than a half-point reduction.

Over 95% of 111 economists now predict a 25 basis point cut at the July 30-31 meeting. Only two economists polled expected a 50 basis point reduction and a further two said the Fed would hold steady.

"The biggest reason for the Fed to cut rates is because it has been priced into the markets for a while now. If they didn't follow through and cut, it would cause a bit of a shock," said Andrew Hunter, senior U.S. economist at Capital Economics.

"I think the recent general message from the Fed seems to be that it's more about downside risks to growth rather than the economy being already weak."

Indeed, while some forward-looking indicators on activity in the U.S. economy have dipped, the unemployment rate is the lowest in 50 years and Wall Street is at a record high - not normally the environment for a change in the interest rate cycle.

Fed rate expectations have taken a U-turn this year, going to a holding pattern earlier in the year from a steady tightening path expected beforehand to a series of cuts. Indeed, just a month ago, the U.S. central bank was still forecast to keep policy on hold for now and ease next year.

But since then, concerns about the impact from the trade war on already-slowing growth as well as weak inflation pressure have got policymakers increasingly concerned.

"Our reasoning for policy easing - slowing growth against a backdrop of subdued inflation and elevated uncertainty - is consistent with the Fed's reasoning for insurance cuts," noted economists at Goldman Sachs.

"By contrast, market-implied odds are consistent with a turn in the cycle, which we do not foresee in the near-term."

The U.S. economy likely lost momentum last quarter and is now forecast to have expanded at an annualised pace of 1.8% in the April-June period, down from 3.1% reported for the first quarter, according to the poll. Growth is expected to hover around that rate in each quarter through to end-2020.

More than 75% of common contributors from last month either downgraded their growth outlook or kept it unchanged.

The latest consensus points to another rate cut in the final quarter and nearly 40% of respondents predicted a follow-up cut was likely to come as early as September.

But interest rate futures are pricing in three rate cuts this year - in July, September and December.

Beyond this year, the U.S. central bank is forecast to keep policy on hold until 2021, the poll showed.

"We don't think this is the start of a full-on easing cycle; rather, these cuts are about providing a bit more accommodation to offset trade headwinds," said Josh Nye, a senior economist at RBC.

"Fifty basis points of easing would fall short of what markets are currently pricing in over the next year, but should be enough to placate investors that are concerned monetary policy has become a bit too restrictive."

The Fed's preferred measure of inflation - the change in the core personal consumption expenditures price index - has remained below the 2% target since the start of 2019 and is not expected shoot significantly higher anytime soon.

With the economy still growing and inflation on an even keel, there was a clear gap between what the economists say the Fed is likely to do and what they recommend.

Asked what the Fed should do at this month's meeting, nearly two-thirds of over 75 respondents said cut rates by 25 basis points. Five said policymakers should cut by 50, while the remaining - over 25% of economists - said they should do nothing.

(Graphic: Reuters Poll: What should the Fed do in July?, https://tmsnrt.rs/2ye3HJP)

"The issues that are affecting the U.S. economy right now and the inflation environment won't be helped by lower rates," said Thomas Simons, senior economist at Jefferies.

"What is weakening economic forecasts going forward is trade tensions. Lowering rates 25 or 50 basis points is not going to change that situation. From a fundamental point of view, it doesn't make sense to us."