By Howard Schneider and Ann Saphir WASHINGTON (Reuters) - Hoping to convince investors they will keep monetary policy super easy for years, two Federal Reserve officials on Wednesday explicitly pledged no rate hikes until inflation gets to 2% and stays there. The Fed's governing board made that vow last week at its regularly scheduled policy meeting, promising to leave rates at their current near-zero levels until the economy reaches full employment, inflation has risen to 2%, and is on track to moderately exceed that level. 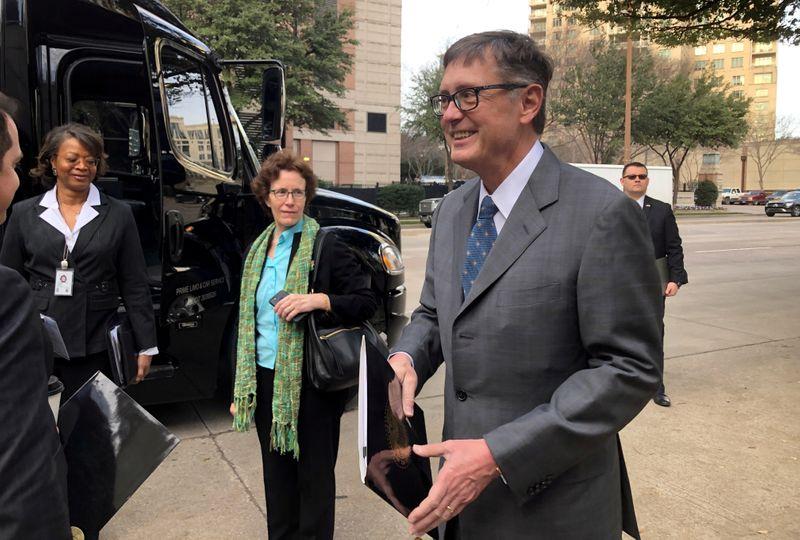 WASHINGTON (Reuters) - Hoping to convince investors they will keep monetary policy super easy for years, two Federal Reserve officials on Wednesday explicitly pledged no rate hikes until inflation gets to 2% and stays there.

The Fed's governing board made that vow last week at its regularly scheduled policy meeting, promising to leave rates at their current near-zero levels until the economy reaches full employment, inflation has risen to 2%, and is on track to moderately exceed that level.

Both Fed Vice Chair Richard Clarida and Chicago Fed President Charles Evans were adamant on Wednesday: Rates will not increase until labor markets recover fully from the economic downturn caused by the coronavirus, and prices hit the Fed's target.

"Rates will be at the current level, which is basically zero, until actual observed PCE inflation has reached 2%," Clarida told Bloomberg Television, referring to the Fed's preferred measure of prices.

"That’s 'at least.' We could actually keep rates at this level beyond that," Clarida said. "But we are not even going to begin thinking about lifting off, we expect, until we actually get observed inflation ... equal to 2%.”

How much of an overshoot beyond that would be tolerable is an "academic" discussion until the economy rebounds, Clarida said.

Evans for his part was not timid. "I don't fear 2.5% inflation" he said, noting that the lower the tolerance for an inflation overshoot, the longer it will take for the Fed to meet its goal of 2% inflation on average.

Regardless, he said, the Fed won't raise rates until inflation reaches 2%, sustainably, and the central bank is confident it will overshoot that goal - conditions that won't be met before the end of 2023.

Investors were disappointed the Fed did not back up its new pledge by increasing its bond purchases, however, and sent stocks lower on Wall Street's major indices.

Ramping up the Fed's bond purchases from their currently monthly pace of $120 billion or otherwise beefing up asset purchases would be premature until the economy gets into better shape, Evans told reporters on a call. That could include unemployment closer to 6% than the 8.4% it is now, and more consumers feeling comfortable spending their money outside of the home.

When that happens, "we would have a better idea of the right amount of accommodation and the way to deliver it," Evans told reporters. "At the moment everybody understands that we are accommodative."

The Fed cut rates to near zero in March and took other steps to combat a recession that took hold as businesses shut down and consumers stayed home to fight the spread of the coronavirus.

Despite some recovery from the economic downturn, "there is a long way to go," Fed Chair Jerome Powell told Congress, with millions still jobless compared to where the economy was in February.

"We need to stay with it ... The recovery will go faster if there is support coming both from Congress and the Fed."

All three said that further government aid from Congress is needed, with Clarida emphasizing that the U.S. economy could return from the current "deep hole" of joblessness and weak demand in perhaps three years.

Fed Vice Chair Randal Quarles, in a separate event, said he would be more patient in reacting to an inflation rate that exceeded 2%, given the Fed's new pledge to address shortfalls on full employment.