(Reuters) - The Federal Reserve on Thursday rolled out an aggressive new strategy to restore the United States to full employment and lift inflation back to healthier levels in a world where it now believes that 'downward risks to employment and inflation have increased.' Under the new approach outlined by Fed Chair Jerome Powell in prepared remarks, the U.S. 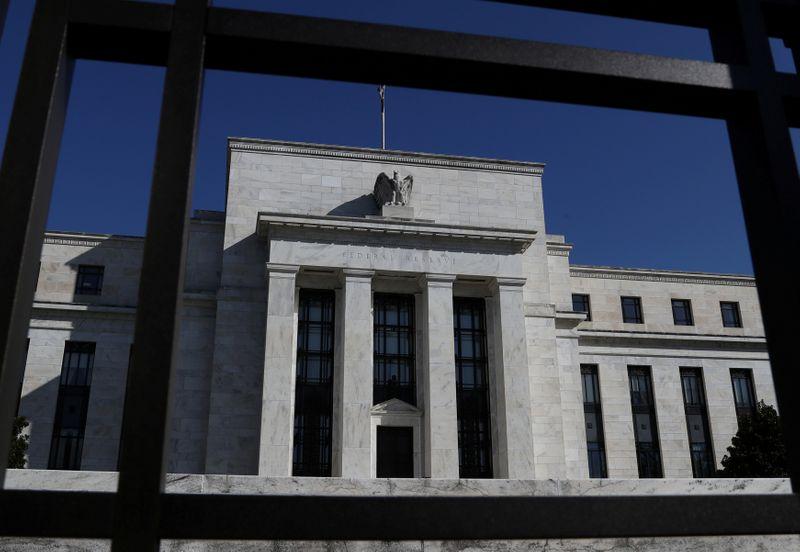 (Reuters) - The Federal Reserve on Thursday rolled out an aggressive new strategy to restore the United States to full employment and lift inflation back to healthier levels in a world where it now believes that "downward risks to employment and inflation have increased."

Under the new approach outlined by Fed Chair Jerome Powell in prepared remarks, the U.S. central bank will seek to achieve inflation averaging 2% over time, offsetting below-2% periods with higher inflation "for some time," and to ensure employment doesn't fall short of its maximum level.

* Fed places employment before inflation in new monetary policy strategy, says it will seek to ensure that employment does not fall short of its maximum level

* Fed: committee now seeks to achieve inflation that averages 2% over time, will offset periods of weak inflation with inflation above 2% for some period of time

* Fed: committee judges that the downward risks to employment and inflation have increased

* Fed: federal funds rate is likely to be constrained by its effective lower bound more frequently than in the past

“It’s important to note they didn’t define the period for average inflation. They are ready to act if inflation expectations shoot up too much. On the margin this leaves room for inflation to overshoot in the medium term.

“The statement didn’t elaborate more on which actual tools will be used. There was no discussion if they will use negative rates, additional bond buying or yield curve control.

“The strategy should be positive in the short term as it could reduce the potential for interest rate hikes. At the same time, the statement acknowledges that Fed ‘has less scope to support the economy during an economic downturn by simply cutting the federal funds rate.’

“The market will probably take some time to digest the implications. But I believe that a higher willingness to let inflation run above 2% should hurt long-end bonds and inflation expectations probably should increase.”

“Chairman Powell made clear that average inflation targeting will provide the bedrock for future guidance on monetary policy. Following periods of inflation undershoot they will purposely aim for a period of inflation overshoot.

“The new revised policy statement refrains from a shift to a formulaic approach. This relatively vague formulation leaves investors to ponder two important questions when thinking about how this affects the trajectory for US monetary policy. First, how much of an overshoot in inflation will the Fed really tolerate, and second, how potent is monetary policy today. In other words, how long will the Fed have to keep interest rates near zero to meet this desired inflation objective.

“Such a policy should result in a steeper government curves. Interest rates will be held down for longer but stronger nominal growth in the future could raise longer-term rates. Real rates are expected to stay deeply negative. Stock markets are expected to cheer this news since ambitions for stronger nominal growth should translate into a period of more robust corporate earnings at the same time as discount rates being held down.”

"He reassured the market that there's going to be continued liquidity and that's when futures popped. The fact the market is so fixated on what Powell says tells me it’s really driven by what the Fed does or says and not by fundamentals."

“We've seen this before and it usually does not end well but it’s almost impossible to forecast when it’s going to end."

"When you have a liquidity driven market people are not pricing in fundamentals or buying stocks according to what the underlying pillars of growth are. Therefore when that liquidity gets taken away or the expectation is it will be taken away the whole house of cards collapses, Like any bubble you can sustain it for a while but you can't sustain it forever."

“I don’t see this as very much of a change in the Fed’s actual longer-term goals or even in their operating policy. I see this more as a big change in their communication about it. The idea that after you undershoot inflation that you would need to have periods that were above inflation, in my mind, has always been there, even from the original statement in 2012.”

“It’s helpful to markets because one of the things here is that inflation has been too low for a very long time. So any time inflation started to move up markets would get fearful, especially the bond market, that the Fed was going to hike…I think the market has come to view the Fed as very hawkish on inflation, and today’s statement is to push back against that and say that they will allow these higher periods of inflation.”

“This announcement this morning is essentially the death of the Phillips curve. Over the past couple of years when the unemployment rate went down to 3.5% and everybody thought, ‘Well, isn’t that supposed to generate inflation?’ Then it didn’t. The changes to the language around letting the labor market have those bigger deviations is reinforcing the idea that we don’t really believe in the Phillips curve as a good predictor of inflation anymore.”

“They would like to target a higher inflation rate, but obviously he (Powell) needs to see it first.”

“He’s kind of disappointed on the inflation front. People were looking for an inflation target above 2%. That’s why the market rallied.”

“It’s all about inflation…we did see equities pop higher, gold also turned positive on his comments on inflation, just knowing they can overshoot their target. I think it pretty much confirmed the market expectations that this extreme level of accommodation is not going away any time soon, and risky assets are liking that.”

“The dollar is going to be the punching bag again. We saw a little bit of a tentative pause in the dollar weakening trade, and now it just seems that over the next few years we’re going to have the economic recovery hopefully pick up, and what’s going to happen is when you have all the other central banks starting to pull back their stimulus, starting to show signs of tightening, the Fed is going to lag on that, and you’re going to see that interest rate differential not be in the dollar’s favor. It’s just providing a longer-term bearish outlook for the greenback.”

(This story corrects the spelling of strategist name to Karen Ward, from Karin)